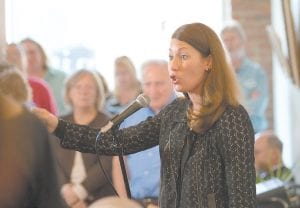 U.S. Senate candidate Alison Lundergan Grimes says the use of Abandoned Mine Lands money to put unemployed miners to work restoring old mine areas is an idea that she “finds appealing.”

“There is considerable debate over whether the money can be used for purposes that have mostly to do with employment,” her campaign spokeswoman, Charly Norton, said after a visit to Whitesburg earlier this week. “But it is an area that she is eager to explore, and a source of money that she would be glad to tap if it is legally available.”

Grimes’s answer to a question asked by The Mountain Eagle comes as welcome news to groups and individuals who have been pushing for the use of Abandoned Mine Lands money to put unemployed miners back to work. Incumbent Senator Mitch McConnell was asked the same question by The Eagle, but did not answer before press time.

The Grimes campaign said “a good place to start to provide relief for unemployed and laid-off miners and their families is to extend unemployment insurance benefits beyond 26 weeks. “ That is not a reasonable period in which to find a decent new job in an economically depressed region with elevated unemployment levels,” Norton said on behalf of Grimes.

While Grimes was speaking to a crowd of about 80 supporters in Whitesburg Monday afternoon, a group of community leaders, nonprofi t organizations, scholars, policy experts, lobbyists and scientists were gathering at Breaks Interstate Park to discuss the looming issue of Abandoned Mine Lands.

“As coal production declines in the region and we transition towards a new economy, the Abandoned Mine Land fund can play an integral part in providing employment and creating healthier, safer communities in the region,” said Rob Goodwin, analyst with the WV CARE Campaign.

The AML fund was created in 1977 as part of the Surface Mining Control and Reclamation Act (SMCRA). The purpose of the fund is to reclaim pre-1977 abandoned mine lands, and it was born from the idea that the coal industry should bear the cost of the environmental and social damage wrought by mining coal. Millions of AML dollars are appropriated to coal states annually, though the allotment process has long been fraught with controversy.

Grimes’s visit to Whitesburg Monday was the second during her campaign to unseat McConnell, who has held his Senate seat for 30 years.