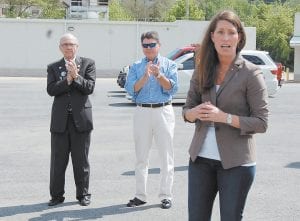 PLEDGES SUPPORT FOR COAL — Kentucky Secretary of State Alison Lundergan Grimes drew applause from former Kentucky Gov. Paul Patton of Pikeville and current House of Representatives Speaker Greg Stumbo of Prestonsburg when she told an audience in Whitesburg last week that she supports eastern Kentucky’s coal miners and will fight against any new and “overburdensome” regulations that threaten more mining jobs. Grimes is being supported by fellow Democratic Party members Patton and Stumbo during her effort to unseat U.S. Senator Mitch McConnell.

With Kentucky’s most famous coal operator standing by her side and applauding, U.S. Senate candidate Alison Lundergan Grimes charged during a campaign stop in Whitesburg that incumbent Sen. Mitch McConnell has stood by and done nothing while thousands of eastern Kentucky coal mining jobs have been lost because of “overburdensome” regulations that were approved while McConnell, the Senate’s minority leader, was in a position to stop them.

“We have lost thousands of coal jobs on his watch, not mine,” Grimes said of McConnell after being introduced by former Kentucky Governor Paul Patton of Pikeville and Kentucky House of Representatives Speaker Greg Stumbo of Prestonsburg. Patton was a successful coal operator before entering politics, and Stumbo makes no secret of his support for the state’s beleagured coal industry.

“The overburdensome regulations were approved on his watch, not mine,” added Grimes, who now holds the office Kentucky’s Secretary of State.

Speaking to a small but enthusiastic crowd that greeted her when her 10-day, 50-county “Kentucky Jobs Bus Tour” stopped in Whitesburg, Grimes also attacked McConnell for his opposition to raising the nation’s minimum wage.

“ Has he gone without a payraise? No!,” said Grimes. “He has quadrupled his pay while voting against raising the minimum wage 15 times.”

Patton said Kentucky voters are being give the chance to “change the history of Kentucky and the history of America” by sending someone to Washington who can work with members of both parties to address the problems facing eastern Kentucky.

Patton and Stumbo both said that McConnell escalated the so-called “war on coal” early in President Obama’s first term in office when McConnell said the “single most important thing” was for Obama to “be a one-term president.”

Stumbo said McConnell’s statement about Obama left the Senate Majority Leader in a position where he couldn’t negotiate with the President about matters that could have lessened the suffering out-of-work miners are now forced to endure.

“Who started the war on coal?” Stumbo asked. “You don’t punch the President of the United States in the face.”

“He (McConnell) could have gone to the President and said, ‘Let’s make an arrangement,’” said Stumbo, adding that McConnell’s actions have “shown you he is not a friend of coal.”

Pointing to Grimes, Stumbo said, “I say let’s send a peacemaker to Washington” who can work with members of both parties to help solve the crisis coal is now facing.