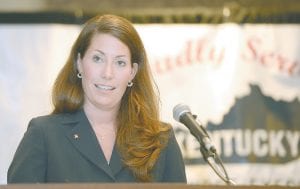 Democratic U.S. Senate candidate Alison Lundergan Grimes has distanced herself from President Barack Obama on coal and health care issues, and shrugged off the low-profile start to her campaign to unseat Senate Minority Leader Mitch McConnell.

“It’s not how you start, it’s how you finish,” she told reporters after speaking to a large gathering of county officials — her highestprofile event since announcing her candidacy more than two weeks ago. “And my record of finishing is finishing strong.”

Grimes told reporters that she disagrees with Obama’s coal policy — a key issue in a state traditionally near the top nationally in coal production.

“I stand for coal,” she said. “I stand by the 15,000 men and women whose (coalfield) jobs are at stake and will continue to fight for them if elected.”

Grimes then took a swipe at Obama’s signature health care law, saying it has plenty of problems. She voiced particular concerns about how it affects small businesses.

“But instead of trying to repeal it nearly 40 times and wasting our taxpayers’ money, we should be talking about solutions,” she said.

She was referring to repeated attempts by congressional Republicans to eliminate, defund or scale back the far-reaching law.

McConnell, the Senate’s top Republican, is an outspoken opponent of the health care overhaul. His campaign manager, Jesse Benton, also called McConnell a “champion for coal.”

McConnell’s strategy is to try to link Grimes to Obama, who is widely unpopular in Kentucky, a state he lost in both 2008 and 2012. Grimes is trying to counteract the strategy by spelling out her differences with the president.

Records from the Federal Election Commission show she made no contributions to either of Obama’s presidential races. And in a strategy session that was secretly recorded and released to Mother Jones magazine earlier this year, McConnell aides complained Grimes was too smart to use Obama’s name in a sentence.

As proof that he sees coal as a potent issue in next year’s election, McConnell recently began running a radio ad in 35 coal-producing Kentucky counties to decry what he describes as the Obama administration’s “war on coal.”

Kennedy, a Democrat, said his portion of Harlan County has lost more than 400 coal jobs in the past year or so. The coal industry’s struggles are having ripple effects, he said, noting that a house in his hometown that was appraised at more than $225,000 recently sold at auction for $49,000.

He blamed the coal sector’s woes on inexpensive natural gas and environmental regulations that are causing utilities to shut down coal-fired power plants.

“He’s one of the most powerful politicians in Washington and he’s not kept the EPA off us one bit,” he said.

Earlier this year, McConnell unveiled legislation aimed at forcing the EPA to expedite the process for coal companies seek- ing permits to open new mines. McConnell has accused the EPA of stonewalling the permitting process.

On another subject, Grimes replied to Republican comments claiming she went into hiding after announcing her candidacy at the start of July. Grimes told reporters she has spent her time since then focusing on her duties as Kentucky’s secretary of state and building her campaign team.

She also tried to cast Mc- Connell as a long-running Senate obstructionist, and said she wouldn’t be relegated to the chamber’s back bench if she is elected.

“I don’t think any woman belongs on the back bench,” she said. “And the question I’d ask is, ‘What has Sen. Mc- Connell done with the front of the bench for Kentucky?’”

Grimes plans a formal campaign kickoff on July 30, a few days before she and McConnell will attend the Fancy Farm picnic on Aug. 3 in western Kentucky.