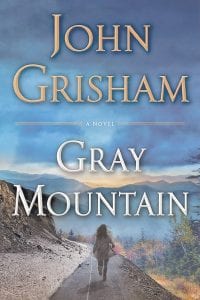 The cover of author John Grisham’s new book is seen in this photo. The book is set in southwestern Virginia and eastern Kentucky.

Gray Mountain may be a fictional place near the fictional town of Brady, Va., and the title of John Grisham’s latest legal thriller, currently No. 1 on the New York Times Best Seller list.

But it sure looks and feels a lot like the eastern coalfields of Kentucky.

That doesn’t surprise Mary Cromer, an attorney for the Appalachian Citizens’ Law Center in Whitesburg, who saw her childhood home in Virginia come under attack from mining and now represents the powerless in court against big coal companies and their highly paid lawyers.

As part of his research for “Gray Mountain,” Grisham spent a day with Cromer in and around Whitesburg as she explained her work, shared stories of her clients and drove Grisham through some of the region where mountaintop mining has devastated the landscape and destroyed lives.

Cromer took Grisham on a drive over Black Mountain, which sits astride the Kentucky-Virginia state line, a mountain preserved on the Kentucky side but devastated by surface mining on the Virginia side.

Grisham said he’d seen mountaintop removal sites from the air, but he’d never visited one and seen the devastation up close.

“A blind man can look at a strip mine and see the missing mountain and devastation around it,” said Grisham. He also saw a slurry pit — “Once is enough.”

But, most of all, Grisham said he was inspired by “the dedication of legal aid lawyers who fight for the little people.”

Since publication of his first bestseller in 1988, “A Time to Kill,” Grisham has written more than 20 novels, nine of which have been made into movies. Grisham, an Arkansas native who practiced law in Mississippi and now lives in Charlottesville, Va., has seen his novels translated into 40 languages with more than 275 million books in print worldwide.

The latest, “Gray Mountain,” turns an unblinking eye on the suffering of those victimized by coal mining and the powerful corporate interests and politicians who support it. Samantha Kofer is a 29-year-old associate at a major New York law firm whose job is eliminated in the wake of the 2008 financial collapse. She agrees to an unpaid internship at the Mountain Legal Aid Clinic in little Brady, Va., near the Kentucky border.

There she goes to work for Mattie Wyatt, who has run the center for two and half decades, playing the legal David to Goliath Big Coal companies. Samantha first helps a victim of domestic abuse whose husband is a meth dealer and then goes to war with Big Coal on behalf of a black lung victim, fighting coal companies who employ hordes of high-priced attorneys. She also becomes involved with a brilliant, flamboyant but reckless trial attorney who fights coal companies, sometimes with tactics as unscrupulous as those of Big Coal, including burglarizing a coal company office to steal incriminating internal company documents.

The stakes are high enough that someone — the reader never learns with certitude who — sabotages the attorney’s private plane and he dies in a crash near Pikeville. Kofer and the deceased attorney’s younger brother carry on the fight by delivering the purloined documents to lawyers who continue to fight the case.

Grisham is personally involved with the Rebuild the Coast Fund that raised millions for relief and cleanup after Hurricane Katrina and with some environmental groups in the Piedmont region. Mountaintop removal mining is a hot issue in that region, Grisham said.

But “Big Law” is what fascinates Grisham most. He followed the case in West Virginia where Don Blankenship, CEO of Massey Coal Company helped elect a sympathetic judge to the West Virginia Supreme Court of Appeals in order to get a favorable ruling in a suit against his company. That interest led Grisham to write “The Appeal,” set in Mississippi and involving a similar effort to select a sympathetic judge.

Grisham has contributed to AppalRed, the Appalachian Research and Defense Fund, a legal aid service for 37 counties in the eastern Kentucky coal region based in Prestonsburg. He’s talked about the ravages of surface mining with John Rosenberg, who headed AppalRed for decades before his retirement.

“ I am inspired by legal aid lawyers,” Grisham said in an email response to questions. “I am fascinated by Big Law. I cannot resist the temptation to vilify unethical lawyers, especially those in big firms.”

Despite his time with Cromer, her ACLC associate Wes Addington and Rosenberg, the lawyers in Gray Mountain aren’t based on them.

“ In this book anyway, the characters are purely fictional,” Grisham said. “Some of the events have been stolen from reality.”

Still, those who know the region will “recognize” the characters in the book, both attorneys and residents on both sides of the coal wars. They may be “purely fictional” but they are as “real” and believable as the real people of the region.

Grisham recognizes the reality of the country’s dependence on coal but sees no need for the devastation caused by surface mining.

“As a nation, we’re addicted to coal, we want an endless supply of cheap electricity and don’t really care where it comes from or how it’s produced,” said Grisham. “Coal is crucial to our country’s energy needs. But it can be mined without destroying the environment.”

Ronnie Ellis writes for CNHI News Service and is based in Frankfort.