By JONATHAN ELDERFIELD
The Associated Press 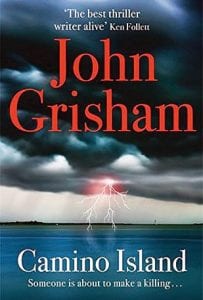 The cover of John Grisham’s “Camino Island” is shown.

The tale opens with a robbery and closes with a reconciliation. In between these bookends, “Camino Island” by John Grisham is populated with ruthless thieves, witty writers and enough intrigue to fill a bookstore’s mystery aisle. At the heart of the story is the theft of five priceless, yet heavily insured, original manuscripts by F. Scott Fitzgerald, including “The Great Gatsby” and “Tender Is the Night,” from Princeton University’s library.

After the successful caper turns sour — a few of the crew are quickly nabbed by the feds — the story moves south with an abrupt turn. The reader is introduced to Bruce Cable, an outgoing and popular bookstore owner in the town of Santa Rosa on Camino Island, Florida, who just happens to make the occasional black market deal for stolen books — and who has a penchant for seersucker suits. Could he somehow be involved in the Princeton theft?

Next we meet Mercer Mann, a novelist who cannot get her new book going and has recently lost her teaching job at the University of North Carolina. She’s soon recruited by an outfit working for the insurance company as the perfect sleuth to suss out the fate of the manuscripts — she spent much of her youth on Camino Island with her grandmother, who died tragically. As Mann looks for the books and comes to terms with her grandmother’s passing, she discovers a town filled with successful and failed writers, from romance novelists to struggling literary fiction authors, some with drinking problems, others brimming with the latest gossip.

As the fate of the lost manuscripts is revealed page by page, the action pivots among Mann, Cable and the thieves until all is revealed.

“Camino Island” makes a fine beach read no matter what island you end up on this summer. However, I’m not sure if this novel’s Camino Island, filled as it is with writers, is Grisham’s idea of “This Side of Paradise” or if he considers the writers to be “The Beautiful and Damned.”