Grocer honored for work with children 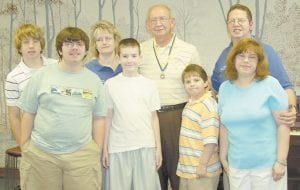 A Letcher County businessman was recently presented the most prestigious award given by the Whitesburg Rotary Club.

Larry Whitaker, owner of the Whitesburg and Neon Food World grocery stores, was awarded the Paul Harris Fellowship on June 12 for his willingness to host five foreign exchange students in the last ten years.

“To let somebody come into your home that you don’t know and treat them like family is much more than anyone else in the club does,” said Roy Crawford, president of the Whitesburg Rotary Club.

The award was created in memory of Paul Harris who founded Rotary in 1905 in Chicago as a way to create fellowship among members of the business community.

“Rotarians designate a Paul Harris Fellow to recognize another person whose life demonstrates a shared purpose with the objectives and mission of the Rotary Foundation to build world understanding and peace. I think we live in a better world today as Larry Whitaker becomes a Paul Harris Fellow,” said Crawford.

“Larry has held offices in this club. He has been unfailingly supportive of our projects. I wish I had a dollar for every time he has volunteered food or supplied it at wholesale,” said Crawford.

“If I had a magic wand, Larry, I would take us all back in time so that Juanita could be here and I know you believe she is smiling down on you right now. In my view this award is for the both of you because as a mother, I’m sure you’ll agree, she put in more effort in taking care of these kids than you did,” said Crawford.

Letters written by two students who had stayed with the Whitaker family in the past were read aloud at last week’s Rotary Club meeting.

“I thought I already knew how great of a guy Larry was until I read these messages,” said Crawford.

“Larry has had an enormous impact on me and I am only one person out of all the lives that he has touched. I can’t even begin to describe how grateful and fortunate I am to have Larry in my life,” wrote Bruzek.

Bruzek described Whitaker as a giving and selfless person.

“Larry is the most admirable person that I know and someone that I aspire to be like. I would like to be able to play a monumental role in someone’s life in the same way that Larry has been an irreplaceable part of mine,” wrote Bruzek.

Crawford said that after Bruzek finished his year as a foreign exchange student, he came back seven years in a row and spent time in the summers with the Whitakers.

“I think it is a true test of how a student feels when they keep coming back,” said Crawford.

Ai Kagawa, of Japan, the second foreign exchange student who submitted a letter about Whitaker, said he treated her as one of his own family members and she thinks of him as her real father.

“Actually, my real father was very strict, and I was afraid of talking to him; however, Larry was different. Larry changed my image of what a father is. He became my closest and kindest father,” wrote Kagawa.

Kagawa stays in touch with Whitaker by telephone while she is at Eastern Kentucky University and stays at his house during school breaks.

“He is the person who I want to tell about my happiest and saddest stories to first because I know how much he cares about me, and he is the father whom I love the most,” wrote Kagawa.

Crawford said he doesn’t know what honor could be higher than having someone think of you as a second father.

Following the readings of the two letters, Whitaker was given a pin, a medallion and a certificate for becoming a Paul Harris Fellow.

“As far as the exchange students, they have enriched my life as much as I seem to have enriched theirs. I have learned so much from the children that we have kept in our home. I have always felt like they were mine,” said Whitaker.