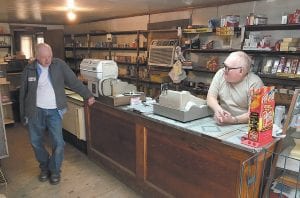 Brothers John W. Ison (right) and Joe Ison were photographed recently in John W. Ison’s Grocery on Linefork. The store, one of the only ones still in that area and one of the few country stores that were left in Letcher County, is closing more than 70 years after it was opened by the brothers’ parents Quentin and Emma Ison.

John and Joe Ison have plenty of stories to tell about the small country store their parents opened at Linefork more than 70 years ago, but one of their favorites has to do with the time an escaped murderer tried to break into the store while their parents were in the back sleeping.

As the brothers remember the story, the would-be thief was an escaped convict who had been convicted of murdering a mail carrier. The killer had escaped from a jail in Harlan County with the assistance of a taxi driver who gave him a ride to Letcher County in a cab that was missing its muffler. With the cab now parked outside Ison’s Grocery, the convict broke out the front window and started to climb inside.

“He jumped to his feet and he didn’t have to hunt for it,” John Ison said about his father, the late Quinton Ison, and the gun he grabbed after his wife, Emma, woke him up and told him someone was breaking in. “He emptied that .38.”

The incident took place sometime in the early 1950s, and to this day a bullet hole remains in the woodwork surrounding the window, a sign of just how close the killer was to getting the death penalty a jury had spared him of earlier. 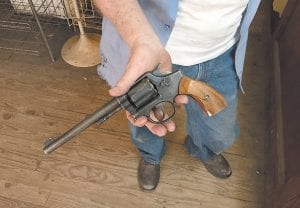 Above, Joe Ison holds the old .38 caliber revolver his father used to scare off a convicted murderer who was breaking into the store. At right, is a bullet hole that remains in the window frame after the incident.

“He said, ‘I could feel the pressure from the bullets going by,’” John Ison recalled the killer as saying after he and the cab driver were captured after the cab crossed Cowan Mountain and ran into a ditch.

Because their father was such a good shot with handgun, the Ison brothers believe the convict was extremely lucky not to have been wounded or killed during the attempted breakin. “They said he could kill a squirrel with it,” the brothers said of a second revolver owned by the elder Ison, a .32-caliber revolver.

John Ison is 76 years old. Joe is 74. The two began reminiscing about the early days of the store — now officially known as John W. Ison’s Grocery — recently after John Ison made the decision to shut it down 45 years after he took over the operation.

“As I recall it was the 13th day of August in 1971,” John said of the day he bought the store from mother Emma.

At that time and for several years afterward, the store, located beside KY 160, was a center of activity in the Linefork area. In addition to being one of the only places that sold gasoline in the rural area located about 15 miles southwest of Whitesburg, it was also a place where customers could find a bale of hay, feed for their animals, and many types of hardware.

“I had all types of nails all of the time — and bolts,” John said. According to Joe, who never had direct ownership of the store but has helped out there for years, the store had a large demand for horseshoes in its early days. In addition to the many types of groceries the store handled regularly, items that were big sellers later on were pipes and mats for heating stoves.

“One time we sold a lot of stove pipes and the mats for the stoves,” Joe recalled, adding that distributors stopped supplying the store with those and similar other products when it started selling more hardware items than some of the bigger stores in Whitesburg. 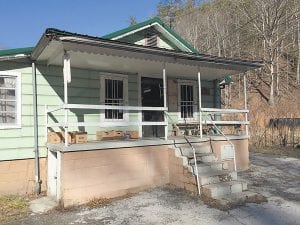 Above, the John W. Ison storebuilding at Linefork. The store is closing.

As has been the case with many other small stores in rural areas the past few years, Ison’s grocery began suffering a large drop in customers when it was forced to remove its two gasoline pumps and tanks because the cost of replacing the aged equipment would be too expensive.

“ December 2012 is when I quit pumping gas,” John said. “Everything was worn. I had one pump you couldn’t fix.”

The store entered the gasoline business in 1947 when it began selling Standard Oil products. Still hanging in the store are plaques of appreciation from Standard Oil and its successor Chevron. At the time the decision was made to give up on the gasoline part of the business, the store was selling between 3,500 and 4,000 gallons of fuel every eight to 10 days. 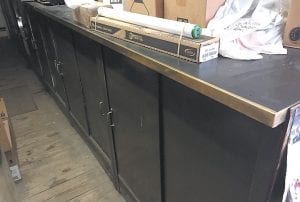 Counters used in the store once belonged to the Kona commissary.

“He was doing excellent with the miners and the construction people,” Joe said.

Business at the store also suffered somewhat when the now-defunct South-East Coal Company closed its mining operations at Linefork and Roxana. The near total collapse of the mining industry in Letcher and neighboring counties over the past few years hasn’t helped matters, either.

“During the Nineties and part of the Eighties when those mines were working we were busy,” John Ison said. “Those were the days I would be out pumping gas before 6 a.m.”

While the store’s closing surprised many longtime customers, others “thought I was going out of business last year when I was out (of the store) for so long,” John said, referring to a threemonth period last fall when the store was idled while he underwent two major surgeries for hernias.

The store was still open last week although its supply of cigarettes, washing powders, soft drinks and other food and household items was dwindling fast.

The Ison brothers still don’t know what they’ll do with some of the historic items that remain in the store, such as the display cabinetry their parents acquired from the old commissary at Kona when it closed many years ago.

Asked what he’ll do now that the store is shutting down for good, John Ison said, “We’ll be involved with something or the other,” adding that brother Joe will still be at work baling hay, raising cattle and taking care of other chores on the farmland they own.