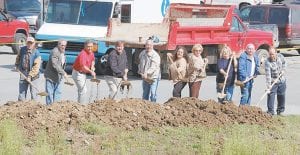 Construction began this week on a pedestrian bridge across the North Fork of the Kentucky River near the end of Broadway Street in downtown Whitesburg.

“This will be the showpiece of east Kentucky,” said Whitesburg Mayor James Wiley Craft. “It’s going to be a beautiful addition to the town.”

The bridge, designed by Nesbitt Engineering in Lexington, will connect Broadway Street to a walking trail that leads to the old Whitesburg High School football field.

The pedestrian bridge will be made of weathering steel like a bridge in Salyersville in Magoffin County, which Craft said will save a lot of money over the years by not having to keep repainting the steel.

Craft said from a distance the bridge in Salyersville looks like it is made of pure wood.

The bridge, with dimensions of 90 feet long and 16 feet wide, will have a slight arch and a concrete deck.

Craft said piers are going to be covered with stone found around town that Italian stonemasons used in several buildings and bridges in Whitesburg. 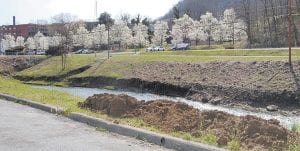 Craft said the bridge will be wired for sound and will have lowvoltage lights on it.

Craft said $70,000 spent on engineering and site preparations was funded through taxes collected through the sales of alcohol in local restaurants.

The bridge will be paid for by a federal T-21 grant of $176,000 from the Department of Transportation and by the City of Whitesburg.

Letcher County Judge/Executive Jim Ward said by connecting two parking lots in downtown it will be easier for people to use the parking lot near the Veterans Museum.

Craft hopes to dedicate the pedestrian bridge on July 4.