Pictured above is the artchitect’s rendering of the front and one side of a new library that will be constructed in the City of Fleming-Neon. The drawing was provided by the offices of Whitesburg architect Bill Richardson.

The Letcher County Library Board has decided to push forward with plans to build a new library in Fleming-Neon.

The 4,800-square-foot building is estimated to cost $750,000 and will be located where the old Hazen Department Store used to be on Main Street. The City of Fleming-Neon originally bought the building and had it demolished with plans to build a park there, but approved switching that piece of property with the library board for the current library building. The library will continue to operate in its current location until after the new building is finished.

“We’ve been trying to get a library up there for several years,” said Jeanette Ladd, president of the Letcher County Library Board. “We just felt like this was the time. Neon really has nothing for the children.”

Ladd said the current Lillian Webb Memorial Library building is not safe for a large group of people. She said the upstairs of the building has deteriorated and is unusable. 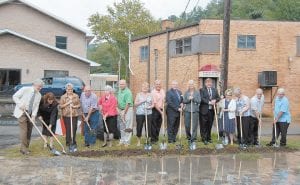 The library has six computers, she said, and children now wait in line outside the building to use them.

“Children are so hungry to learn,” said Ladd. “We are getting a beautiful library. It’s state of the art. We know the library will be a safe place. Programs will be wonderful.”

The new library will have 15 computers, wi-fi and a young readers’ area. Plans also call for a coffee shop, which Ladd says will also serve pastries.

A large community room can be closed off from the rest of the library so it can be used in the evenings.

Whitesburg architect Bill Richard said the design is unique because the building has three street-side entrances, including one near Fleming-Neon Elementary School.

Dr. Sam Quillen, a member of the Letcher County Board of Education, said the library is like having a $1 million classroom added onto the elementary school.

“What a wonderful addition of technology,” said Quillen.

“This library is going to be vital to our youth at the school,” added State Sen. Johnny Ray Turner.

The main entrance will face Main Street and the backside of the building will face the school and Neon First Church of God. Windows from the Internet café will face Rescue Street.

“This library is something we need in this area for the kids and adults,” said Letcher County Judge/Executive Jim Ward. “In hard economic times we are building.”

Funding includes $100,000 in coal severance money and Ladd said the library board has been saving money for this project as well as applying for grants.

“Hopefully it will be the place to be in Neon,” said Ladd. “I think it will be worth it to the town.”

Members of the library board are Ladd, Margaret Lewis, Jo Combs, Mahala Frazier and Carl Banks.