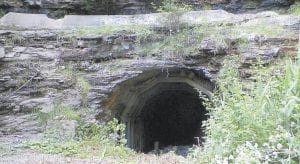 The photo above shows the tunnel opening on the Pound, Virginia side of Pine Mountain. Below, Jerry Meade at the opening near Jenkins. (Photos by Margaret Sturgill)

Charlie Holbrook remembers trying to get a job back in the Forties when the Chesapeake and Ohio Railway started to blast a 3,600-foot tunnel through Pine Mountain to carry coal from mines in Pound through to Jenkins.

Holbrook didn’t get that work but years later got the job of closing up the old portal above Jenkins, he told those gathered Sunday afternoon to talk about reopening Pine Mountain Tunnel and the endless tourism opportunities that would present.

Built from both sides of the mountain to meet at the state line, the Pine Mountain Tunnel opened in 1947 and closed hardly a decade later in 1958. People continued to walk through, however, until safety concerns prompted its closure.

Holbrook’s confident it can be reopened. “You gotta make the first move,” he said.

Letcher County Constable Roger Hall, a former mine inspector, believes he’s probably the last to have traveled all the way through the 3/4-mile tunnel, a little over four years ago. It was a dark and scary trip, Hall said, including through one flooded stretch where he literally had to devise a way to swim across. The roof is 25 to 30 feet high and the sides are intact. But there are four massive roof falls “and rats as big as dogs,” he said, adding they’re all white, having never seen daylight. 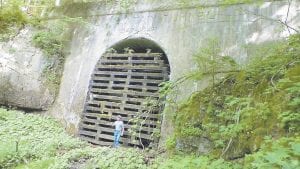 But Hall said he’s seen in coal mines first hand how much water drainage can be managed and how roofs can be stabilized. It can be done, he said.

Jenkins Mayor Todd Depriest said the initial idea is to get a small portion open, maybe 300 feet, so people can see what can be done.

There are skeptics, Depriest said, “but it will never be done if you don’t try.”

Work is underway in Kentucky, where TECO Coal Co. has promised to donate the tunnel, which sits not a half mile down a path from the Little Shepherd Amphitheater. TECO donated that property as well, where an outdoor drama is staged each summer, inspired by the success of the Trail of the Lonesome Pine in Big Stone Gap and also based on a John Fox Jr. novel, this one about the Civil War. 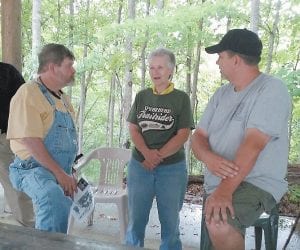 Don Amburgey led that drive through the Little Shepherd Arts & Crafts Council and had sites set on the tunnel from the beginning nearly 10 years. Amburgey said he has tried to stay in regular contact with TECO officials but has not been able to get a firm answer. He said he would reach out again this week. Depriest noted that the company is now in discussion of a potential sale so it has been distracted away from the tunnel efforts.

The project is helped by having people from Virginia working on their side, Depriest said.

Debbi Hale, lead organizer on the Virginia side, told of attempts just Friday to get a peek inside the tunnel with a drone. The tunnel was just too big and too dark after about 30 feet in, she said. They will try again equipped with an infra-red camera.

A teacher and coach at J.W. Adams Combined School, Hale gave her students credit for inspiring her work. They told her this old rail bed would make a really good trail, she went up there with them and “realized they were right,” she said. Hale also works with Spearhead Trailblazers on trails development,

That was four years ago, she said, and “when I started talking about the trail, I would hear tunnel.”

Depriest said the wheels of government crank slowly and asked everyone to spread the word about the project in hopes of stimulating private donor interest. He also said they’d like to find some place that might have done something similar before.

Terry Short, a Pound Town Council member, said the project could cut across a variety of interests, from outdoors to history and including geology, noting what the road cut through the gap has revealed. An engineering firm that specializes in tunnels and trails — and manages the tunnel at Cumberland Gap — has connections to local projects, he said, and might be a resource.

Short cautioned that nothing about reopening the tunnel would be simple. With a project like this, he said, “Any engineering firm is worth their weight in gold for the funding they can get you. ” e Pine Mountain C&O

Th Trail would connect to the Red Fox Trail, the only historic trail on U.S. Forest Service property in the Clinch District. It would provide access to the area between North Fork Lake and the Pine Mountain Trail, which is part of the Great Eastern Trail connecting the Gulf Coast to Canada.

Jenay Tate is the Editor and Publisher of the Coalfield Progress in Norton, Virginia.