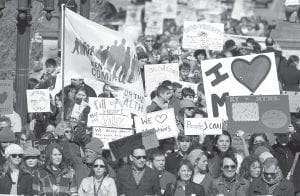 The rally has become an annual Valentine’s Day rite in Frankfort to show support for perennial, but so far unsuccessful, legislation that would effectively end the controversial practice.

The demonstrators demanded a transition away from coal-powered energy and also called for better working conditions for workers in Kentucky’s coal industry.

Carl Shoupe, a former coal miner and union organizer, mocked politicians in the “marble palace” who call themselves “friends of coal.”

Mountaintop removal clears forests and blasts rock to extract coal, often dumping dirt, rock and rubble in nearby valleys. Coalfield lawmakers shrug off claims by environmentalists about the damage caused by mountaintop removal, and have effectively killed all bills that would stop it, including two in the General Assembly this year.

“We’re here once again to demand a just transition to a healthy, local economy in the mountains and to an immediate end to the destruction that’s caused by mountaintop removal mining,” said Sue Tallichet, chair of Kentuckians for the Commonwealth, which organized the rally.

Tallichet also called for “safe working conditions for our miners.”

The rally was dubbed “I Love Mountain Day” and attracted people like Deane Patton and Phil Wakeman, commercial photographers who live in Oldham County.

“We need to get off dirty coal and stop global warming,” she said.

As for jobs created and retained by the coal industry, many of them no longer pay enough to sustain a middle class lifestyle, she said.

“The end is coming for coal,” said Patton, 61. “This is about looking to the future.”

Attendee Zoey Barrett, a 15 year-old from Lexington who grew up in the mountains, said the event is about her future children.

“I’d like one day for my kids to hike up a mountain and drink out of a creek without getting sick,” she said.

Kentucky Coal Association President Bill Bissett said the actions backed by protesters could cost jobs and increase electricity bills. He said Kentucky coal is safer and less disruptive to the environment than it ever has been.

“(A) vast majority of Kentuckians share a far more positive view of coal than those gathering on the capitol steps today,” Bissett said in a statement. “And every Kentuckian benefits greatly from one of the lowest Kilowatt per hour rates in the nation, thanks to (Ky.) coal.”