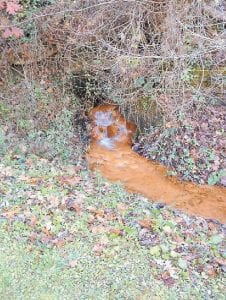 This photo shows acid mine drainage flowing into Sandlick Creek from deep mines that were abandoned in the area many years ago.

Two streams flowing into Sandlick Creek have been found to contain high levels of lead, nickel and zinc, and a third had levels of arsenic barely below the Kentucky standard for drinking water. Nine streambeds in Letcher County showed very high concentrations of heavy metals, which can cause illness in humans and can kill aquatic life.

The contaminants were found after volunteers from Headwaters Inc. conducted sampling on 14 streams and 12 streambeds in the Kentucky River watershed of Letcher County. The study analyzed samples for heavy metals, which are elements, compounds, or alloys that are good conductors of electricity. When they are in solution, these metals will cause water to conduct electricity.

They also present dangers to human health. Lead and arsenic, for example, are known poisons when concentrated in high amounts. Children are far more vulnerable to these toxins than adults. Children experiencing lead poisoning can suffer from anemia, kidney failure, and mental retardation.

The majority of the water samples revealed relatively low concentrations of heavy metals. A few exceptions to this were sources flowing directly into Sandlick Creek, the most notable of which were sites at Powderkeg Road and Rainbow Drive. These sites contained high levels of lead, nickel, and zinc. One site near the Sandlick Volunteer Fire Department yielded a level of arsenic that nearly exceeded the Kentucky standard for drinking water.

Soil samples from streambeds, however, revealed different results. Nine of the 12 soil samples contained heavy metal concentrations that exceeded federal guidelines for soil contaminants. A sample taken near the Little Shepherd Trail head on Pine Mountain, for example, contained levels of heavy metals that would seriously harm plants, birds, and other animals. This was also the case with locations on Cane Hollow of Camp Branch, Company Branch of Craft’s Colly Creek, and Allen Branch of Craft’s Colly Creek.

The sources of contamination in these streambeds were evident upon further examination. The stream near Little Shepherd Trail flows out of a highway hollow-fill built when U.S. 119 was reconstructed. The Cane Hollow and Allen Branch streams flow from abandoned underground mines, and the Company Branch stream runs alongside a large slate dump.

Many of the metals that exist in Letcher County’s streams are results of historic mining and construction. They are often introduced into streams when minerals in the soil, such as iron pyrite (sometimes called Fool’s Gold), are disturbed. When these minerals are exposed to water and air, iron oxide (rust) and sulfuric acid is formed, thereby creating the familiar orange hue that is characteristic of many of the county’s streams.

It is difficult to see many of the metals in the water, however, because they stay dissolved in solution due to the acidity of the stream. Once the water reaches a pH above 7, most of these metals fall to the bottom of the streambed.

While this does not necessarily reflect the condition of the water itself, it does indicate the past presence of dangerous toxins that have now settled out of the water and onto the streambed. When the streambed is disturbed by flooding or human activities, these metals can be introduced back into the water, presenting a risk to human health and aquatic life.

Tarence Ray works with Whitesburg-based Headwaters Inc., a not-for-profit organization whose mission is to clean up Kentucky’s headwater streams. Readers wishing more information may visit the organization’s website at www.kyheadwaters.org or contact Ray by phone at (606) 634-8669, or by email at tarence@kyheadwaters.org.