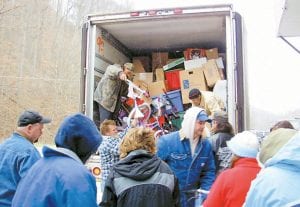 HELPING OUT – At least 30 volunteers braved the cold weather December 16 to unload presents from two tractor-trailers at the Sandlick Fire Department. This could be the last year that Emergency Aid for Children delivers Christmas gifts to Letcher County families in need.

A group composed of residents of Michigan and Kentucky is considering taking a break after eight years of giving Christmas presents to needy families in Letcher County.

Mary Hendrian, who grew up in Race Track Hollow in Isom, moved to Michigan after she married, but always wanted to give back to the community that helped her when she was younger. Hendrian and her cousins created a non-profit organization, Emergency Aid for Children, to make her dreams come true.

After helping at least 200 families over the past seven years, the Hendrians and Maddens said this year may be the last time they deliver food, toys and other presents to Letcher County families.

“I don’t want to (stop), but well see. We’re going to reevaluate it at the end of this year,” said Mary Hendrian. 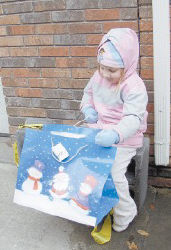 Four-year-old Lindsay Mullins (right) looked at a package that will be given to a family in need. She is the daughter of Stevie and Wendy Mullins of Isom. Her grandparents, Henry and Janet Madden, co-founded Emergency Aid For Children.

The Hendrians and the Maddens work all year to raise money and to find others who will donate items for families in need.

This week, Emergency Aid for Children will help 34 families in Letcher County and six in Johnson County. They will spend each night this week traveling all over Letcher County to meet families and encourage children to study hard and stay in school.

Janet Madden said the reason they help people is because Christmas is about giving.

“We just feel like the Lord has blessed us in many, many ways. Mary wants to return to her birthplace and help people,” said Madden.

Mary Hendrian’s father died when she was three years old, leaving her mother to rear nine children. People in the community helped her family at Christmas, so now she is returning the favor.

This year’s trip is special to Mrs. Hendrian because for the first time her grandchildren, Kyle and Rachel Hendrian, have come with her to help hand out gifts.

“It meant a lot to me to bring my grandkids with me,” said Mary Hendrian.

Five-year-old Rachel said by watching her grandmother she has learned that it is good to help people.