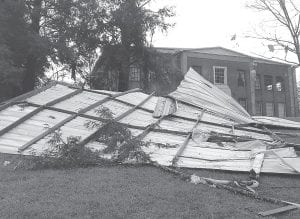 Winds from an April 17 storm blew off part of the roof from the old auditorium building constructed as part of the Stuart Robinson School at Blackey.

A not-for-profit religious organization in Blackey is seeking donations to help pay for repairs needed to the auditorium building at the old Stuart Robinson School.

Heavy winds blew off the building’s tin roof in mid- April. The old school and the 16-acre site on which it is located are now known as Calvary Campus Mission Retreat Center, a part of Lynch-based Meridzo Center Ministries.

“It fell mangled in the front lawn of the campus,” campus director Paul Radosevich said of a portion of the roof that was torn off at about 1:45 a.m. on April 17.

Radosevich said community members have expressed concern about the storm damage. The estimated cost to repair damage to the auditorium’s ceiling, walls and carpet is at least $50,000.

The auditorium was built in 1914 and is now used to host movie nights and other community events in the Blackey area. Church groups from outside the area use the mission retreat center for retreats and camps.

“It has such fond memories for the people who went to school here many years ago,” he said.

The Stuart Robinson School, built in 1913 on a 16-acre site as a Presbyterian mission, was named in honor of a pastor from Louisville. It was closed in 1957 and sold by the Southern Presbyterian Church after Letcher High School was established to serve the area.

Persons interested in donating money to help repair the auditorium roof may contact the Calvary Campus Mission Retreat Center by telephone at 633-9300.