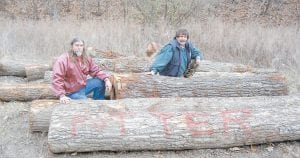 Dave Potter, left, and his cousin, Mark Combs, sit on fallen white oaks that were allegedly chopped down by a timber thief at the family’s property at Craft’s Colly. (AP Photo/Samira Jafari)

“It’s just like someone cut your heart out,” says the 77-yearold Potter, who lost an estimated $50,000 worth of generations-old oak trees, which were taken from her property and sold, without permission, while she was away.

Rogue loggers have long preyed on private properties from coast to coast, taking advantage of the elderly, the absent or – in Potter’s case – both. And they traditionally had little to fear from law enforcement officials hesitant to pursue criminal charges, instead chalking up most complaints to property disputes. But as timber values rise, so have the stakes for landowners – and the attitude of law enforcement is adjusting accordingly.

“The authorities who have dealt with it as a property matter are starting to look at it as more of a criminal matter,” said Joseph Phaneuf, executive director of the Northeastern Loggers’ Association. “But it’s not happening without a push from the individuals affected.”

In recent years, there’s been a steady movement to curb illegal logging. Some states, such as Mississippi and Virginia have established specific timber theft laws, making illegal logging on private property a felony punishable by jail time.

In Kentucky, the problem has resulted in the formation of the Appalachian Roundtable, a nonprofit that joins forestry experts, attorneys, law enforcement and victims to alert landowners to logging scams and pursue criminal charges against timber thieves. The group is drafting legislation to be introduced in the 2008 Kentucky General Assembly to make timber theft a felony punishable by a prison sentence.

“Historically, it’s been viewed by local police and the judiciary as a civil complaint,” said Keith Cain, president of the Kentucky Sheriffs Association. “But the theft of timber is a criminal issue and should be prosecuted as such.”

With the overseas demand for North American hardwoods growing, it’s become a more costly issue for private landowners, whose tree farms and woodlands make up 55 percent of U.S. timber production, forestry officials say. The rest comes from lands owned by the state and federal governments, the logging industry and other investors.

While there’s no timber theft charge on the books in Kentucky, regular theft charges can still be filed, said Dea Riley, executive director of the Appalachian Roundtable, which is currently working with more than 50 families who claim they are victims of timber thefts.

“It’s a racketeering game,” said Riley, who helped Potter convince the Kentucky State Police to investigate her case when local authorities wouldn’t. “These people are victims.”

Because timber theft often goes unreported or unprosecuted, few track cases nationwide. However, a 2003 Virginia Tech University study estimated that landowners lose in excess of $4 million to timber thieves each year in the otherwise poor but hardwood-rich Appalachian states.

Also, domestic prices for hardwoods, such as cherry, walnut and white oak, have increased about 10 percent over the past decade, according to analysts, but the demand overseas, especially in China and southeast Asia, has increased substantially over the past few years.

“They don’t have enough wood to feed their mills,” said Sara Baldwin, a timber analyst at the University of Georgia, referring to the Chinese market.

For the unscrupulous logger, it adds up to little risk and hefty profits.

“The pressures of high-value timber and absentee landowners pose a tremendous opportunity for people,” said Phaneuf.

Phaneuf added that even though timber thieves represent a small portion of loggers, they tarnish the image of the industry that relies heavily on word-ofmouth referrals among landowners.

“Those kinds of stories reflect very poorly on us and create distrust in the marketplace,” he said. “We don’t even call them loggers – basically they’re just thieves.”

South Carolina’s tree theft law – which poses hard jail time and stiff penalties – is considered model legislation by many in the industry.

To Cain, a western Kentucky sheriff who supports Riley’s group, timber theft is no different than other crimes, though he’s had trouble in his own Daviess County with getting timber theft cases sent to criminal court. He said the same local prosecutors who vigilantly try other felonies are reluctant to get involved in timber cases.

That’s because they anticipate questions about property boundaries and few people have the money or the resources to hire a lawyer, pay thousands of dollars for a survey or hire an expert to place a value on the timber lost.

They usually operate along adjoining property lines and claim to have either owner’s permission to log on the property in question, according to the New York Forest Owners Association.

If either landowner is absent, a timber thief can spot a group of oaks, chop them down and exit the property without anyone knowing for weeks.

Caught in the act, a logger may offer money – typically a fraction of the actual market value. Accept the money and the logger may continue to hack away at your property, claiming you’ve been paid for the timber.

“They’re in the logging business,” Callore said. “They’ll go into the courthouse and find out who has a local address and who has an absentee address, and go and cut on the property.”

Potter suspects she was targeted the same way.

A couple of years ago, she decided to move in with her grown children in Ohio with her husband, who is diabetic and blind. She only visits her 25-acre property near Ermine a few times a year.

If it hadn’t been for her nephew, Mark Combs, who lives on the adjacent property, she may not have known for months that her oaks were taken down.

Combs confronted a local logger one November day after hearing the unusual sound of a chain saw on his aunt’s property.

The case is slated for a grand jury next month, though it still brings Potter little satisfaction.

“Thirty-two oak trees that have been there for years,” said Potter. “It was my turn to give them to my son and daughter, but you can’t replace those.”

Samira Jafari is a reporter for The Associated Press. She is based in Pikeville.