Group to give away trees, host ‘Family Litter Challenge’ 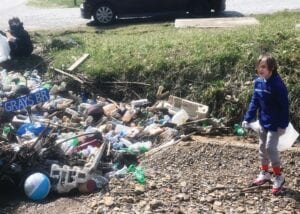 Headwaters Inc., a nonprofit intended to address water pollution issues in Letcher County, will be giving away trees in April as it plants trees as a buffer along the North Fork of the Kentucky River.

The project is one of two events planned by the group for this spring.The second is a family litter challenge aimed at getting families to pick up litter in their communities.

Elizabeth Jones, watershed coordinator for the group, said representatives of Lilley Cornett Woods, Eastern Kentucky University, UKCARES,The Kentucky Division of Forestry and the University of Kentucky will be planting trees in a riparian buffer near West Whitesburg Elementary School on April 5.Though the actual planting is a closed event because of Covid-19, but anyone in the county who wants trees will be able to drive through the student drop-off at the school that day and pick them up.

The group has been given several thousand trees by National Wildlife Federation and the Kentucky Waterways Alliance. Trees that were ordered include bald cypris, river birch and silky dogwood, but Jones said she is not sure which species will be given away. 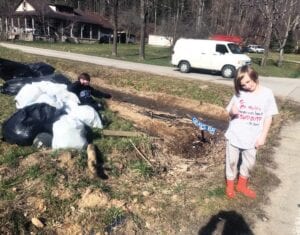 Elizabeth Jones and her two sons, Gregory, 10, and Allan, 9, cleaned up this garbage pile left byfloodwaters recently near their home at Grays Branch, Potters Fork.

Jones is also planning a “Family Litter Challenge” this spring.Though dates for that have not been set, it is intended to get people to get out with their families and clean up the county.

She said the idea came to her last year when litter pickups were being cancelled because of the pandemic.

“Because of Covid, we couldn’t have any of these large pickups,” she said. “Anybody can get out with their family, pick up some garbage and take some pictures of it, and post them with the hashtag #familylitterchallenge.”

As an example for others, Jones and her children picked up garbage at the mouth of Grays Branch at Potters Fork. The cleanup netted 14 bags of garbage that had clogged a culvert under KY 805.