Growing up in Hoot Owl Hollow 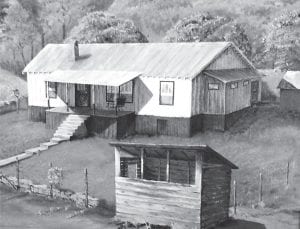 Elva Pridemore’s son painted this rendering of her family’s house as it appeared after it was remodeled the first time. The house is still standing, but has been remodeled again.

In my mind’s eye I can see the old homeplace where I was raised in the hollow that people called Hoot Owl Hollow at Isom. I was the third child of Hiram and Ella Caudill Pridemore and my family lived in a home that my dad purchased from my grandparents, who had a dream of moving to Lincoln County where they had purchased a farm and had hopes of becoming farmers. The purchase of this home was made in the summer of 1938.

Our home was an L-shaped house, and the bottom part of the L was two bedrooms. Each bedroom had its own entry onto a long porch that spanned the length of the house.

When we first moved in you could not go from one bedroom to the other without going out onto the porch. The front bedroom had closets on each side of the rock chimney that housed a fireplace in each room. Dad cut a door on the backside of one of the closets to make a hallway from one bedroom to the other. The back of the house was taken up by the kitchen with a small porch on the left side and an L-shaped large porch on the right side.

The first bedroom held two full-size beds with a library table (handmade by my grandfather) under a window that was located between the two beds. A dresser was located on the wall that opened into the kitchen, and this dresser held all our socks and underwear. We were a family of six so you can see we did not have an overabundance of clothing. I had that dresser refinished and had it until last summer when we downsized and I gave it to my brother.

The second bedroom held one full-size and one twin-size bed and a small wicker table. I can’t remember there being any other furnishing in that room. Later on Dad bought a used bedroom suite that found a home in there.

The kitchen was a large room and the main focus of that room was a large wood and coal cook stove that stood in the back right hand corner. Going down the right hand wall was a door onto the porch and then one of the old Hoosier kitchen cabinets, the kind that held a flour bin with its own sifter. This cabinet also held our dishes.

Along the back wall was a beautiful buffet that was a match to our eating table and chairs. I never gave a thought to it then, but before my father died he told me that they had had a beautiful table that was handmade from one large board and that someone wanted it so much that he traded them the buffet, table and chairs for it.

Dad said he always regretted trading and wished he had keep the handmade table. That would have made a great heirloom to pass on to one of his children.

Along the back wall was a table, probably handmade, that held the water bucket with a dipper and the washpan where we washed our faces and hands. The eating table and chairs occupied the middle of the room.

That table is where I got into trouble. On the occasion of our evening meal I was leaning back in my chair and Dad told me to stop before I fell backward. He said if that happened he would whip me. I didn’t heed the warning and fell back onto the floor and was told that he owed me a whipping. I think we both forgot about it until some time later one of my brother got in trouble and Dad started to whip him and he said, “You never gave Elva that whipping you promised”. Nevertheless I got my whipping, a very light one.

The floors in this house were wide, rough boards that with years of wear had been worn smooth. The way we kept them clean was by scrubbing them with sand. On washday we would use our rinse water to scrub the floors. The kitchen got the most scrubbing.

In the kitchen there was a round hole in the middle of the floor about the size of a quarter, probably made by a knot in the board that had fallen out. This hole was of great interest to us children. We were fascinated by what might have fallen through. We were always losing our marbles through it and would go under the house and crawl all the way back to the hole to retrieve them. This feat was accomplished by crawling on your stomach the last several feet.

Sometimes we would be pleasantly surprised to find a coin (dropped there by Dad probably). There would also be other odd things, sometimes even silverware. Other times we would find nothing.

We had a large paling fenced yard that had several big locust trees in it, the kind that have thorns. These thorns would fall off and if you happened to step on them, they were very painful on a child’s bare feet.

Our yard had no grass and we swept it with a broom once or twice a month. We had a nice horse apple tree in the backyard that made good apple pies.

In the left side of the yard there was a large smokehouse and just below the smokehouse was a gate leading to a lot that contained several buildings. Just outside the yard gate was a midsized stream of water we called a small branch, with a bridge across it.

In the lot there was a large corncrib. This crib always had corn in it. Sometimes on a rainy day Dad would tell us kids he would give us a penny for each mouse we could catch from the crib. That is the reason that I’m not afraid of mice today. I don’t like the dirty creatures, but am not afraid of them.

There was also a hog lot, a chicken house and a large building that had once been a barn that was no longer used as one. Dad had blacksmith equipment in it and on rainy days it made a great place to play. Last but not least was our outhouse where resided our old catalogs.

On the right side of the house was a very large garden where, as children, every summer we had to pick up the rocks as Dad plowed.

Our barn was located a good distance from the house. You were required to walk up a steep bank to reach it. This is where the cattle were fed and the milking done. I never did learn to milk, but I sure knew how to hunt the cattle and they were usually found in the farthest corner of the pasture. I will just past this tidbit along for free, it did not do any good to pick up a granddaddy longlegs and ask it to point to where the cows were.

I don’t know how large our farm was, but it went all the way to the top of the mountain behind us and joined with Blair Branch. Dad had a large apple orchard on the top of that mountain. The large orchard held several varieties of apple trees. Dad’s apples were well known throughout the community and he always had a ready market for them, the only problem was getting them to market because of the orchard’s location.

When picking time came Dad used a mule and sled to haul the apples from the mountain. The sled runners had to be equipped with chains wrapped around the runners in order to hold it from sliding and bumping the mule. Even then someone had to ride the runners to kept the sled from turning over on some of the steep slopes of the mountain. Later on when we children were old enough we had a pony that we used instead of the mule and Dad allowed us to haul the apples without his help.

We did not have electricity. Our home was lit by kerosene lamps that required a lot of care. The globes had to be cleaned and the wicks trimmed and the lamps filled with kerosene. Our home was heated by a fireplace in both bedrooms and the wood and coal cook stove in the kitchen. Wood and coal had to be carried in and a supply always there to keep the fires going. We had a hand dug well from which we got water for drinking and cooking. Our water for all other purposes came from a large stream that ran down in front of the house.

I can remember how hard our parents worked to keep us fed and clothed, and how we kids learned to do our share of the work as soon as we were old enough. When I think back to those day I don’t dwell on the work, I think about how happy those days were. When the work was done we could let our imaginations run wild and play whatever we wished without the fears children experience today. In the winter when we couldn’t play outside, our parents would come up with games they had learned in their childhood, like “Fox and Goose” and they played them with us.

Life was simple, we were happy; how I wish it could be that way today for our grandchildren and greatgrandchildren.