Guessing who the new NCAA champion will be 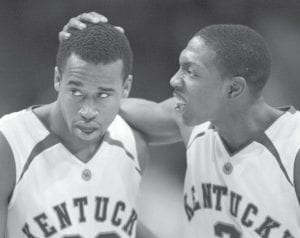 Kentucky’s Ramel Bradley, right, and Joe Crawford return to the NCAA Tournament this week, taking on Marquette in the first round of the South Regional in Anaheim, Calif. The game begins at 2:30 p.m. on March 20. (AP Photo/Brian Kerseym)

The word bubble has been retired for another year.

No more worrying about quality wins and strength of schedule. The NCAA’s field of 65 has been set, and here’s one way to look at the next three weekends (seedings in parentheses, winners in uppercase):

NOTRE DAME (5) vs. George Mason (12) – The Fighting Irish’s inside-outside combination of Luke Harangody and Kyle McAlarney will be too much for the Patriots, who will be trying to be this year’s George Mason.

Washington State (4) vs. WINTHROP (13) – The Eagles’ three-man senior class has won 101 games, including one in the NCAA tournament last season, so they won’t be bothered by the Cougars’ defense that holds opponents to 57 points per game. 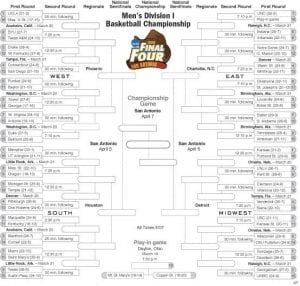 OKLAHOMA (6) vs. Saint Joseph’s (11) – The Sooners have won seven of their last 10 with two of the losses coming to Texas, so a relentless mascot shouldn’t bother them.

LOUISVILLE (3) vs. Boise State (14) – The Cardinals have lost their last two games, but they should get healthy against a team that went three overtimes to beat New Mexico State in the WAC championship game.

BUTLER (7) vs. South Alabama (10) – The Bulldogs are a veteran team that reached the round of 16 last year and spent three weeks this season in the top ten.

TENNESSEE (2) vs. American (15) – The Volunteers made their first appearance at No. 1 in the poll this season. The Eagles are making their first NCAA appearance.

NORTH CAROLINA vs. Arkansas – The Razorbacks like to get the game going in the open court. Unfortunately for them, so do the Tar Heels.

LOUISVILLE vs. Oklahoma – The Cardinals have four players who made at least 40 3-pointers this season, and no coach believes in letting them fly like Rick Pitino.

TENNESSEE vs. Butler – If this game were guards only it would be close. The Volunteers’ frontline should be too much for the Bulldogs.Regional Semifinals

NORTH CAROLINA vs. Notre Dame – The inside matchup of Tyler Hansbrough of the Tar Heels and Harangody will need a referee of its own. Just too much speed for the Irish.

TENNESSEE vs. Louisville – If the coaches don’t overshadow the players with their suit selections, this should be an offensive show with Chris Lofton being the difference from 3-point range.Regional Final

NORTH CAROLINA vs. Tennessee – The Tar Heels cap a two-week run in their home state by outscoring the Volunteers in a game in which the shot clock operator could call in sick and no one would know.

KANSAS (1) vs. Portland State (16) – The Jayhawks should make the Vikings’ first NCAA appearance a quick one.

Unlv (8) vs. KENT STATE (9) – The Golden Flashes are seeded with the team from the big conferences for a reason: They are tough with a well-balanced offense.

CLEMSON (5) vs. Villanova (12) – The Tigers reached the ACC championship game for the first time since 1962 by ending a 22-game losing streak to Duke and then hung with North Carolina in the title game. Facing the Wildcats should be a snap compared to that.

Vanderbilt (4) vs. SIENA (13) – The Saints beat Stanford early in the season and have won 10 of their last 11. The Commodores have lost three of five, giving up at least 78 points in all those games.

SOUTHERN CAL (6) vs. Kansas State (11) – If this were a freshman vs. freshman matchup, Michael Beasley and the Wildcats would prevail over O.J. Mayo and the Trojans. It’s five-on-five, though, and Mayo’s supporting cast is better.

WISCONSIN (3) vs. Cal State Fullerton (14) – The Badgers swept the Big Ten titles. The Titans are in the tournament for the first time in 30 years. Bo Ryan teams don’t have letdowns.

Gonzaga (7) vs. DAVIDSON (10) – The poster teams for the mid-major conferences meet, and for one of the few times in the last decade the Bulldogs won’t have the best player on the court. Stephen Curry of the Wildcats was fifth in the country in scoring with a 25.1 average.

GEORGETOWN (2) vs. Maryland-Baltimore County (15) – The Hoyas are trying to return to the Final Four. The Retrievers are playing their first NCAA tournament game.

KANSAS vs. Kent State – Even if the Golden Flashes stayed even with the Jayhawks starters, the difference in depth will be too much.

CLEMSON vs. Siena – The Saints go marching out as the Tigers love not facing North Carolina or Duke.

Wisconsin vs. SOUTHERN CAL – The Trojans show they have other athletes than Mayo in running past the Badgers.

GEORGETOWN vs. Davidson – Few teams have the ability to shut down shooters the way the Hoyas do. Curry can ask Joe Alexander of West Virginia.Regional Semifinals

KANSAS vs. Clemson – The Tigers’ break from the power teams ends as does its tournament run.

GEORGETOWN vs. Southern Cal – Hoyas center Roy Hibbert doesn’t dominate every game, but his eyes will light up against the Trojans who barely outrebounded their opponents this season.Regional Final

Kansas vs. GEORGETOWN – The Hoyas return to the Final Four in what has the trappings of an entertaining defensive matchup. The Jayhawks keep looking to get there for the first time under coach Bill Self.

MEMPHIS (1) vs. Texas-Arlington (16) – The Tigers lost one game all season. The Mavericks have never played an NCAA tournament game.

MISSISSIPPI STATE (8) vs. Oregon (9) – Bulldogs guard Ben Hansbrough gets to match his brother from North Carolina with a first-round win.

MICHIGAN STATE (5) vs. Temple (12) – If John Chaney were still coaching the Owls, the Spartans would be obsessed with preparing for the matchup zone. The difference will be the Spartans’ bulky front line.

PITTSBURGH (4) vs. Oral Roberts (13) – The Panthers are one of the hottest teams in the country coming off the Big East tournament run. The Titans are in their third straight NCAA tournament, but they went 1-3 against teams from the power conferences this season.

MARQUETTE (6) vs. Kentucky (11) – The Golden Eagles have one of the best defensive backcourts in Jerel McNeal and Dominic James, and the Wildcats averaged over 16 turnovers per game.

STANFORD (3) vs. Cornell (14) – The halftime matchup of the debate teams would be close, the basketball game shouldn’t be because of the Cardinal’s ability to dominate up front.

MIAMI, FLA. (7) vs. Saint Mary’s, Calif. (10) – The Hurricanes won six of eight, including a victory at home against Duke, to close the ACC regular season. The Gaels lost three of their last five, including a home loss to Kent State.

TEXAS (2) vs. Austin Peay (15) – The Longhorns are from Austin. The Governors were named after a man named Austin.

PITTSBURGH vs. Michigan State – This is a matchup of tough teams that love to play defense and rebound. The Panthers have the tiebreaker in forward Sam Young, who averages 18.3 points.

STANFORD vs. Marquette – The Golden Eagles just don’t have anyone to match up with 7- foot Lopez twins.

TEXAS vs. Miami, Fla. – With point guard D.J. Augustin running the show, the Longhorns should be able to control the tempo and force the Hurricanes into mistakes.Regional Semifinals

Memphis vs. PITTSBURGH – The Panthers beat Duke early in the season and eliminated three ranked teams in the Big East tournament, so the Tigers’ resume won’t impress them. This should be the time of the tournament when the Tigers’ 59 percent free-throw shooting catches up with them.

TEXAS vs. Stanford – The Longhorns’ backcourt is better. The Cardinal’s frontcourt is better. Something has to give, and it will probably be Stanford’s bench.Regional Final

TEXAS vs. Pittsburgh – This is where the Longhorns make playing in Houston pay off. The Panthers just won’t have an answer for the sea of burnt orange.

DRAKE (5) vs. Western Kentucky (12) – The Bulldogs’ incredible season gets one more chapter with their first NCAA tournament win since 1971.

CONNECTICUT (4) vs. San Diego (13) – The Huskies will show the Toreros why they have been among the nation’s top defensive teams for the last decade.

PURDUE (6) vs. Baylor (11) – Neither team has any NCAA experience, but the Boilermakers have played solid defense, which usually doesn’t show any nerves.

XAVIER (3) vs. Georgia (14) – The Bulldogs’ incredible run through the SEC tournament comes to a crashing halt against the Musketeers.

WEST VIRGINIA (7) vs. Arizona (10) – Joe Alexander of the Mountaineers averaged 29 points over a five-game stretch until meeting Georgetown. The Wildcats don’t play defense like the Hoyas.

DUKE (2) vs. Belmont (15) – The Bruins lost as a No. 15 seed the last two years to UCLA and Georgetown, both of which went on to the Final Four. Cue the Cameron Crazies.

UCLA vs. Brigham Young – The Cougars had trouble with Tyler Hansbrough in an early season loss to North Carolina, so the Bruins can expect a big game from freshman star Kevin Love.

CONNECTICUT vs. Drake – The Bulldogs don’t have a player taller than 6-8. The Huskies’ 7-3 Hasheem Thabeet anchored a frontline that averaged 8.8 blocks per game.

XAVIER vs. Purdue – Stanley Burrell is one of the nation’s best perimeter defenders, and he’ll be ready to lock down any of the Boilermakers’ outside shooters who get hot.

DUKE vs. West Virginia – The Blue Devils want to play in the open court and shoot 3s. The Mountaineers allowed opponents to shoot 35 percent from behind the arc.Regional Semifinals

UCLA vs. Connecticut – The Huskies won a regional in Phoenix on the way to both their national championships. They didn’t have to face a veteran, tournament-tested team like the Bruins, though.

DUKE vs. Xavier – The Musketeers almost beat Ohio State in this round last season. The Blue Devils don’t have an inside presence like the Buckeyes did in Greg Oden, but they were third in the nation in scoring at 84 points a game.Regional Final

UCLA vs. Duke – The Bruins’ front line will be too much for the Blue Devils, but this won’t be a double-figure win for UCLA like the last two regional finals.

NORTH CAROLINA vs. Georgetown – When these teams met in the regional final last year, the Tar Heels blew a late lead and turned it into a cause for this season. They’ll run their way to revenge to get to the Final Four.

TEXAS vs. Ucla – These teams met in early December, and the Longhorns snapped the Bruins’ 25-game how winning streak by two points. Not a whole lot has changed as Texas prevails in another great matchup of points guards D.J. Augustin and Darren Collison.Championship Game

NORTH CAROLINA vs. Texas – The Tar Heels didn’t lose on the road all season, and they add to that by beating the Longhorns less than 100 miles from their campus. Tyler Hansbrough’s season included him making last-second shots, making huge defensive plays late in games and spending quite a bit of time getting up after being knocked to the court. There won’t be much difference against the Longhorns who just don’t have an answer for him.