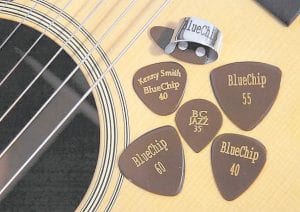 BlueChip Picks offers a wide variety of styles in picks, including some custom-tailored to expert musicians’ tastes. Mandolin virtuoso Chris Thile uses the CT55, top right, which was designed according to his specifications. (Knoxville News-Sentinel/Adam Brimer)

Toss a BlueChip pick into a fire, and it won’t melt.

Step on it, and it won’t break.

Put one in your hand, and you have what a growing number of professional bluegrass musicians say is the best sounding, best playing pick on the market.

Matthew Goins and his fourman crew run the BlueChip Picks company out of a small machine shop on the outskirts of Knox County. When not making picks for guitar and mandolin players, they manufacture special parts for semiconductors.

And it is that work that makes Goins keep the material used for the picks a secret.

The first BlueChip pick was made four years ago after one of Goins’ machinists who plays guitar decided he needed a pick that would outlast tortoise shell, the Holy Grail of pick material that can no longer be purchased legally because it comes from an endangered sea turtle.

Working with a piece of hightech material, they fashioned a guitar pick that delivered clear, rich tone. Because the material was self-lubricating, the pick slid smoothly off the strings, yet it was easy to grip, even with sweaty hands.

There was no doubt that the pick had potential. What Goins couldn’t figure out was how to make the picks remotely affordable given that each 10-inchsquare, half-inch-thick piece of the material they were made from cost $4,800.

“The material was so expensive, I could have easily said ‘I don’t waste it on picks’ and walked away,” Goins said. “I’m mighty glad I didn’t.”

After months of brainstorming, Goins finally developed a manufacturing system that enabled him to sell his picks for $35 apiece.

People bragged on the picks’ tone, grip, and speed, but for the most part, they remained a secret shared among a few pickers around Knoxville. The turnaround came at the 2007 Fall Homecoming at the Museum of Appalachia in Norris, when Goins gave a few picks to Danny Roberts, mandolin player for the nationally recognized bluegrass band, The Grascals.

“I asked Danny if he thought this was something worth pursuing,” Goins said. “He said, ‘I’ve searched for the perfect pick my whole life. As far as I’m concerned, the search is over.’ I was blown away.”

Rather than sink a lot of money into advertising, Goins travels to Nashville and lets his picks do the talking. Renowned mandolin player Chris Thile is a recent convert to BlueChip picks, as is Dan Tyminski, Rhonda Vincent and The Steep Canyon Rangers, to name a few.

Scott Houston, guitar player for Knoxville’s Pick ‘n’ Grin Bluegrass Band, said he gets better tone and playability from Goins’ picks than any he has used.

“You get a BlueChip in your right hand, and your left hand better keep up ‘cause it’s going to get left behind,” Houston said.

Goins sells his picks around the world. They come in nine different shapes and various thicknesses. All told, he manufactures close to 30 different styles.

As word of BlueChip picks spreads over the Internet in chat rooms devoted to mandolin and guitar pickers, Goins has been shocked to see his product discussed in foreign languages.

“Before all this, I had no idea people could get so passionate about picks,” he said. “I’m tickled to death, but sometimes I feel like saying, ‘Man, it’s just a pick.’ “