Guitarist being mentioned among greats to perform here Saturday 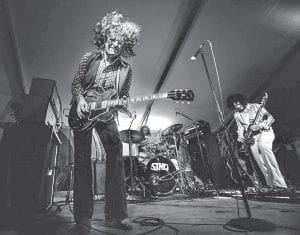 A rock guitarist featured in the current edition of Premier Guitar magazine will perform in Letcher County this weekend.

JD Simo, who leads the rock trio SIMO, will perform at Summit City in Whitesburg on Saturday night.

“Simo’s new self-titled full-length (album is) a glorious piece of rocking blues in the tradition of Hendrix, Michael Bloomfield and other guitar-crazy heroes of the distant past.,” wrote Edd Hurt of Nashville Scene.

In addition to JD Simo on vocals and guitar, SIMO is Frank Swart (bass) and Adam Abrashoff (drums).

Writes Michael Ross in Premier Guitar: “With their styling, musical references, and equipment drawn from the 1960s, it would be easy to dismiss SIMO as some sort of ironic retro lark. Nothing could be further from the truth. Like Jack White and The Black Keys, JD Simo and his band have taken what was great about the rock music of another era—warm tone, direct emotions, freedom to experiment—and adapted it to now.”

Noting that Simo is a graduate of “the school of honky tonk,” Ross writes that “hearing Simo’s self-titled band, you would never guess that the lad can still occasionally be heard tearing up “Truck Driving Man” … Simo’s music is way more classic rock than classic country: “Fool for You” sounds like a Free outtake and “Aoh” recalls the Yardbirds, while other tunes flash back to Zeppelin, or Truthera Jeff Beck.”