Guv: ‘It’s up to the people of eastern Kentucky’ 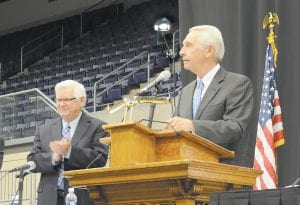 As they opened up the Shaping Our Appalachian Region (SOAR) conference earlier this week, state and federal leaders echoed the same sentiment: The road to economic success and growth for eastern Kentucky will be a long one and will take the erasure of ideas such as county lines.

Gov. Steve Beshear referred to Monday’s all-day conference as the beginning of a process, one which will be difficult.

“There are no magical formulas nor quick-acting miracle cures,” he said. “Nor in my mind is there a single big solution. I believe there are a lot of small solutions and they’ll all take time.”

However, the governor also put the onus for the work to be done on the people of eastern Kentucky, a group of people to whom he referred as the area’s “most valuable resource.”

“I can’t guarantee you success,” Beshear said. “What I can guarantee you is if we don’t try, I know we won’t be successful. Frankly, long-term success is up to you. It’s up to the people of eastern Kentucky. Government doesn’t have all the answers and politicians come and go.”

The time for the work, the governor said, is now.

“ This situation has reached a critical point,” Beshear said. “Coal has long been a foundation of this region’s economy and it will continue in that role for decades to come. But there should be no doubt in anybody’s mind that its role as an employer is reducing.”

A report will be the result, Beshear said, and will suggest the best infrastructure for moving forward.

U.S. Congressman Hal Rogers opened his speech by saying that he hopes the conference will be seen as a historic event.

“A century from now, I’d like it to be said that, on a cold and dreary Monday morning, Dec. 9, 2013, that a group of some of Eastern Kentucky’s best began a revitalization that resulted in a new eastern Kentucky,” Rogers said.

But, Rogers said, action is the key element.

“We’re not here to make another study of eastern Kentucky,” he said. “Thank you. We’ve got plenty of those. We are here to come up with a plan for action to be followed up by committees and all of us working together until fruition.”

Rogers reiterated Beshear’s statements that the process of changing the region will not be easy or quick, but he also emphasized that, like his projects PRIDE and UNITE, it will take many people working together.

“We’re asking you to pull together as a team, as a region, for the long-term,” he said. “I want us to think about our region and not, so much, about our counties and towns. Because we all have a common problem, common problems.”

Rogers also stressed in his speech the importance of quality, high-speed communication methods, which can break down the barriers that have held the mountains back in the past.

Stumbo pointed out that the area doesn’t have a navigable river, a four-lane highway system or a public four-year college.

“We can blame God for our river system,” Stumbo said. “But we ought to blame ourselves, to some degree, for the other two.”

However, he said two of the issues are in the process of being, if not completely rectified, at least fixed to a degree.

State Rep. Leslie Combs and the Beshear administration, Stumbo said, are working together in an attempt to get a strategic plan to four-lane the entire Mountain Parkway into the state’s four-year road plan in the General Assembly session beginning next month.

The Kentucky Coal County College Completion program, the alternative plan put together by Beshear in the wake of the failure to get the University of Pikeville put into the state’s university system, has been successful, Stumbo said.

State Senate President Robert Stivers also echoed the idea that for eastern Kentucky to have a bright future, it will take work and time, and he spoke more strongly on the idea that the old political lines, alliances and methods of the past will no longer work.

“ It’s time to blur the county lines,” he said. “It’s time to forget the political partisanship and the parties to which we belong. It is time that we sit down and have the real dialogue, the real discussion, the real solutions for us to not just make eastern Kentucky better.

Stivers also said he believes this week’s conference was the beginning of the work.

“This is not an independence day,” Stivers said. “This is the alpha. You all will determine what the omega is. The work starts today.”

A former Minnesota lawmaker and his father told the gathering that the response to a collapse in mining jobs in their state’s iron-ore region 30 years ago may provide ideas for the region, which has suffered 6,000 coal layoffs in the last couple of years.

Tony Sertich, who now heads the Iron Range Resources and Rehabilitation Board, and Joe Sertich, now a consultant and business owner, said planners brought better coordination to community colleges in the region, put more focus on technical education and training, and started an engineering program.

Tony Sertich said Minnesota’s efforts have been successful, with the region’s unemployment rate about 6 percent. There also has been nearly $500 million in public and private investment in the region since 2012, projected to create more than 4,100 jobs.

About 1,700 people registered to attend the event.

Russ Cassady is the editor of the Appalachian News-Express in Pikeville. Information for this report was also gathered by The Associated Press.