Gwen Farmer’s garden can feed half of Illnois 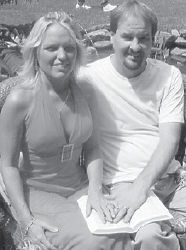 Hello, friends and neighbors! Here we are in the middle of July. Where is the time going? It seems that I have just got a column ready and it is time once again.

Thanks once again for everyone telling Ann Calihan how much you enjoy this column. It really pleases me that people enjoy my column. Of course no matter what anyone does you can never please everyone! Sometimes I wonder if people gets tired of reading about my little grandson, my little sidekick Bennie Wiederhold. If so, guess there are other columns as he seems to be with me an awful lot!

I can say, “Get your book, let’s read.” He says, ‘Book,” and gets one from a little desk in my living room. Remember Bennie is just a year and half old! Now if I can somehow find a way to keep him out of my kitchen cabinet drawers!

This little tike would rather play with a cardboard box than all the toys in my living room. When I say, “Let’s get your diaper changed,” he runs and hides in the box, pulls the sides in. I have been thinking about putting an address label on it and sending it down my brother, Richie Hall’s, way as he is always saying send him to me. Just kidding!

Shirley Wells of Clarksville, Tenn., and I have gone back raising children I think.

Gwen Huff Farmer sent me some pictures of her garden and yard. Everything is so beautiful looking. It looks as if she is trying to feed half of Illinois.

Gwen’s son, John Farmer, and his wife, Sonya, came to visit her, along with John’s fishing buddy. When Gwen loaded the dishwasher it wouldn’t work. Sonya did the dishes by hand. When Gwen called the number on the dishwasher, seems as if she doesn’t use it enough, all she had to do was reset the switch. Gwen really enjoys having her family coming by to enjoy all her good nutritious homecooked meals.

It seems that I missed out on plums from Gwen’s trees as the deer seemed to like them as much as me.

I have some sad news to report. The Calihan reunion which was held in October at the Kingscreek Fire Department will no longer be held! With the passing of Junior Calihan and with Hattie Calihan Taylor living so far away, not able to drive any more, plus Joe Calihan lives in North Carolina, and Johnny and Ann lives in Harrison, Ohio, it is too much to try to get everyone together. Not to mention the price of gas.

I know this will be missed by several who gathered in Paradise Valley (Paices Branch), especially those who braved the hike to the Big Rock. There was always plenty of laughter by Johnny and Ann’s children, and sometimes tears of joy as the Calihans recalled growing up in the hollow. Coolie Jr. Calihan will be having a family reunion in this area. If he or Pat gives me details I will put it in my column.

Clayton, my brother, Jerry, and Mattie Hall and I had the pleasure of attending the Calihan reunion, two different times. A good time was had by everyone. Hattie always had a small gift for everyone. Ann and several others always made sure there was food to spare. Of course my little extra mountain mama Alma Whitaker always had her delicious chicken and dumplings; she shared her secret with me.

Speaking of reunions, don’t forget: Sept. 20 has been picked for Letcher County Day at Harrison Community Center, 300 George Street, Harrison, Ohio. I will enclose my phone number at the bottom of this column.

Richie just called to say he had a very nice basket of vegetables brought to him by Kelly Hogg, who is the son of Blackburn Hogg. As he was telling what all he had fresh from the garden, I had to say ha-ha, I have green beans, squash, carrots, turnips also brought to me by Johnny Calihan. At first Richie thought I wasn’t serious.

Johnny planted Roma beans; they are very good. In my opinion nothing can take the place of half-runner beans. Mommy used to plant something called bunch beans, and of course she loved fall beans. I love a small bean called greasy beans. When they are cooked they taste a little like shucky beans.

I miss having a garden and canning tomatoes and green beans, canning mixed vegetables for homemade soup for the winter.

As I was walking through my yard I recalled how we spent the hot summer days at Roxana. No one knew what air conditioning was, there were no fans either. You were in high cotton to have electricity. We found shelter under a shade tree, fanned with a piece of pasteboard box. Swam in the river. Mommy raised her windows and we had no screen doors, a fly strip dangled from the ceiling.

I called Dover Cornett of Richmond. Dover is gravely ill, please keep him in your prayers. I will try to find his address so you can send him a card. Dover used to send me pictures of his garden. I had the pleasure of meeting this special man in the lobby of the Super 8 Motel at Whitesburg during a reunion. I have teased and told him I picked him up for a quarter. I guess I had better explain that remark. Ann Calihan and I had been talking about Dover and Nadine Cornett being there and we didn’t know either one, when we realized he was sitting within a few feet of us. I walked over to him teasing and asked his name. He replied, “Give me a quarter!” Of course I told him I was asking for his life’s history! We both started laughing, and I told him who I was. It was a brief encounter, it has touched my life to have met this sweet man. I feel the same way about Clarence Huff and Clarence Halcomb of Hamilton, Ohio. Dover Cornett, Clarence Huff and Clarence Halcomb were lifelong friends from Linefork.

Dover’s sister-in-law, Loraine, is continuing the genealogy research that Nadine has been doing for years. We all should take the time to listen to someone that is older than us, as we can gain so much knowledge. Clarence Huff was a walking history book!

I would love to be able to meet Gladys Hogg of Frostproof, Fla., who knew our great-grandparents, Will and Nance Coots of Big Branch.

Hello to Letha Collins of Osgood, Ind. Letha is the sister of the late Starvin’ Marvin, who was a DJ at WMMT.

My deepest sympathy goes out to the Amburgey family in the sudden death of a 12-year-old Jonathan Amburgey. There is so much heartbreak everywhere you turn!

Get well wishes to Lauren Wagner, daughter of Tom and Sue (Calihan) Wagner and granddaughter of Johnny and Calihan. Lauren had surgery and is now home from the hospital. Ann is helping take care her.

Terry David Jones of Ingram’s Creek had a terrible accident that almost severed his fingers. Terry is the son of Rick and Barb Jones, and the grandson of Bruce Jones. I hope he regains complete use of his hands. Terry is in for a long road of recovery!

The following paragraph was sent to me by a very good friend of mine, Donna Perry of Amelia, Ohio:

“While sitting on the side of the road waiting to catch speeding drivers, a state trooper sees a car puttering along at 22 mph. He thinks to himself, ‘This driver is as dangerous as a speeder.’ So he turns on his lights and pulls the driver over. Approaching the car, he notices that there are five elderly ladies – two in the front seat and three in the back – wideeyed and white as ghosts. The driver, obviously confused, says to him, ‘Officer, I don’t understand. I was going the exact speed limit. What seems to be the problem?’ The trooper trying to contain a chuckle, explains to her that 22 is the route number, not the speed limit. A bit embarrassed, the woman grinned and thanked the officer for pointing out her error. ‘But before you go, ma’am, I have to ask, is everyone in this car OK? These women seem awfully shaken.’ ‘Oh, they’ll be all right in a minute, officer. We just got off Route 127.’