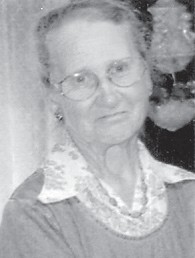 Funeral services were held January 26 at Letcher Funeral Home in Whitesburg. Burial was in the family cemetery at Linefork.