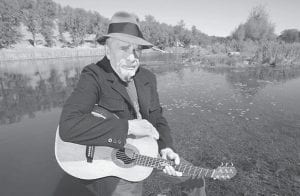 Appalachian music might seem a strange fit for a performer so closely linked to the hard electric twang of country’s Bakersfield Sound, but don’t tell that to Merle Haggard.

“The Bluegrass Sessions,” released last week, finds Haggard and friends putting fiddle, Dobro and banjo to some of his classic tunes, like “Big City” and “Mama’s Hungry Eyes.”

“I’ve had years to become a fan of bluegrass and never had done anything in that area. I thought before I cash out I’d do one,” Haggard said recently from his home in northern California.

He went to great lengths to be authentic. He released it on bluegrass band leader Del McCoury’s record label, recorded it at Ricky Skaggs’ studio just outside Nashville and had Ronnie Reno (son of bluegrass banjo ace Don Reno) produce it.

“We tried one take the traditional way of doing it with everybody in little booths, and that didn’t work,” Haggard explained. “So we circled up in the studio and recorded it with one mic. We found that to be much better. It allowed us to see each other and to play together instead of putting things together one piece at a time and making sure every piece was perfect.”

He wrote four new songs for the disc and included a Jimmie Rodgers medley and a Delmore Brothers tune, “Blues Stay Away from Me.” But the strength of the album might be Haggard’s reworked gems. The instrumentation and his weathered voice give the songs a totally different feel, as though they had sprung from a mountain hollow instead of a smoky beer joint.

“We chose to do Merle Haggard songs as opposed to traditional bluegrass songs because we didn’t want to do the same songs that have been done so many times. We wanted to have original material,” Haggard said.

At 70, the Country Music Hall of Famer is a living legend. He’s written and recorded dozens of hits, many of them classics like “Mama Tried” and “Workin’ Man Blues.” His “Okie from Muskogee” became a cultural touchstone in the late ’60s with lyrics admonishing war protesters and the counterculture.

Along with Buck Owens and some others, he helped define the twangy Bakersfield Sound, which was a direct contrast to the smooth, string-laden country records coming out of Nashville in the 1960s.

“His music strikes everybody. It doesn’t matter what people listen to, whether it’s pop or bluegrass or country or jazz. He strikes a chord with all of them,” McCoury said.

“He’d sing notes that you didn’t expect to come,” Adkins said. “That was his thing, and it still is. He does that stuff that’s so cool. His cool factor is just off the charts.”

Today, Haggard continues to work at a fast clip. Besides the bluegrass project, he joined Willie Nelson and Ray Price earlier this year on an album of country standards, “Last of the Breed.” Last year, he and George Jones teamed for an album called “Kickin’ Out the Footlights … Again.”

During the interview, Haggard was getting ready to dash off to rehearsal. “I play a lot of music even when I’m off. I have part of the band that lives in Redding (California) with me. We just try to keep ourselves active in music.

“It’s quite a hassle trying to keep yourself active in music,” he adds.

Besides his own concerts, he has played shows recently with Bob Dylan and the Rolling Stones and is working on a new album with Stones’ guitarist Keith Richards.

He would not say too much about the project except, “It’s a Memphis rock, Chuck Berry, Keith Richards-type record. There will be appearances on there from people you’d recognize.”

Perhaps the loftiest compliment paid him came this year, one songwriter to another. Inspired by Haggard’s 1969 classic, Dylan wrote “Workingman’s Blues #2” for his latest album, “Modern Times.”

Dylan told him he was going to write the song and work it into his shows.

On the Net: http:// www.merlehaggard.com