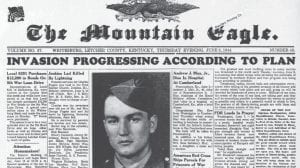 A banner headline in the Thursday, June 8, 1944 edition of The Mountain Eagle told the news of the Allied Forces’ successful invasion of Normandy, France that occurred two days earlier. Shown in photo is Cpl. Eugene Polly, who was wounded in battle in February. See related information elsewhere on this page.