Halcomb is player of the year 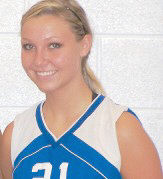 Victoria Halcomb has been named 14th Region Player of the Year by the Kentucky Volleyball Coaches Association.

Halcomb was also selected to the 14th Region All Tournament Team and was chosen Most Valuable Player of that tournament.

The Lady Cougars will play the winners of the 11th Region in the Kentucky High School Athletic Association Sweet Sixteen Volleyball Tournament for the state championship at 2:15 p.m., Friday (Oct. 30) at Northern Kentucky University