Halfway to Hazard’s Tolliver is no stranger here 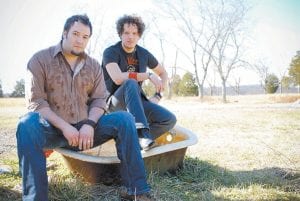 Now and then Above, Halfway to Hazard’s David Tolliver (left) and Chad Warrix pose for a publicity photo. At left, Tolliver is seen performing as a child in a Mountain Heritage Festival talent contest he won by singing covers of songs by artists such as Bob Seger. Tolliver is a native of Hindman, while Warrix is a native of Jackson. The two now live in Nashville. Halfway to Hazard will be in concert in dowtown Whitesburg on Saturday at 9 p.m.

More than 20 years after winning a Mountain Heritage Festival talent contest, David Tolliver is more than happy to come back to Letcher County this week as part of the festival’s main attraction for 2009.

Tolliver, a native of Knott County, is one-half of the countryrock duo Halfway to Hazard, which has top billing at this year’s festival.

Tolliver won a talent competition at the Mountain Heritage Festival when he was about 10 years old and singing cover songs by Bob Seger, Stevie Wonder and Billy Vera and the Beaters while dancing on a truck trailer (low boy) which was being used as a stage.

The concert by Halfway to Hazard, which also includes Jackson native Chad Warrix, will take place in Mountain Heritage Village in downtown Whitesburg at 9 p.m. on Sept. 26.

“We’re just really excited to come back to east Kentucky and play,” Tolliver said during a recent telephone interview. “We’re looking forward to playing at Mountain Heritage. It’s going to be a fun night.” 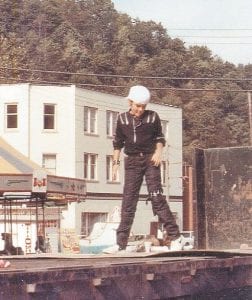 Tolliver said the group’s sophomore album is set for release in early October. The duo’s self-titled debut album, which was co-produced by Tim McGraw, was released in August 2007 by StyleSonic Records, which is partly owned by McGraw, and distributed by Mercury Nashville. The album spawned two hit singles, “Daisy,” which reached No. 39 on

Billboard’s country music chart, and “Devil and the Cross,” which reached No. 50.

“Hopefully we will be finishing that up and getting the CD out because we are getting a lot of questions and I like it,” he said. “Everybody is excited. They’re hungry for their music.”

Tolliver said Saturday’s concert will feature plenty of songs from the new album.

Tolliver and Warrix generated a lot of local interest recently when they sponsored their second annual Halfway to Hazard Charity Trail Ride on Aug. 22 and 23. The Perry County event included a concert with Tim McGraw, Dierks Bentley, Keith Anderson, Gabe Garcia and Danielle Peck. The two trail rides have generated more than $300,000 in the last two years to benefit Buckhorn Children and Family Services.

“The second one was great,” said Tolliver. “It was unbelievable. It grew twice as big as it was from last year.”

“To raise the money for those kids was unbelievable,” said Tolliver. “They need it. That’s an organization that does great work. They’ve got hundreds of kids over there that need a second chance and without that money it may not be there.”

Tolliver said he and Warrix were looking for a way to help children in eastern Kentucky when they chose the Buckhorn center.

“We wanted to do something for our home and something where we could go back and interact with the kids and talk to them and give them a hug and see where the money is actually going to use and going to work,” said Tolliver. “The Buckhorn Children’s Family Services is an unbelievable organization. They give kids a second chance. We’ll keep working for it as long as we can.”

The duo spent Labor Day showing their support for the coal industry at a rally held at a reclaimed mine site in Holden, W.Va.

“We did a Friends of America Rally in West Virginia and it was sponsored by Massey Energy which is a huge coal corporation in West Virginia,” said Tolliver. “We do support the coal industry. Our families were miners. It’s the lifeblood of eastern Kentucky. If you take that away from east Kentucky then you are going to deprive the area of a lot of resource.”

“Back in the ’70s it was bad,” he said. “They didn’t have reclamation projects. They didn’t have (regulations) in place to keep people from just coming in and raping the land, but now they do. You have to put up so many millions of dollars of bonds now before you can even start mining.”

Tolliver said he and Warrix have spoken with people who oppose the mountaintop removal method of strip mining and said he has no problem with listening to opposing views.

Halfway to Hazard’s video for the new single “I Know Where Heaven Is” includes footage of coal mining as well as scenes featuring family, friends and their hometowns.

Warrix is the son of former Breathitt County Judge/Executive Lewis Warrix and his wife, Grace. Tolliver is the son of Virginia Tolliver Long of Richmond and Jackie Tolliver of Hindman.

Tolliver has several Letcher County connections. His sister Renee is married to former Whitesburg dentist Stephen D. Combs. Tolliver is a nephew of Sue and Ron Parks of Ermine and Don and Colette Tolliver of Dry Fork.

He credits his parents for his strong work ethic.

“My father gave me the work ethic,” said Tolliver. “He would work sometimes 20 hours a day to support the family. Mom was at home supporting the family in her own way. She was cooking and cleaning and raising the kids and that built a strong work ethic in me.”

Tolliver also credits his parents for supporting his love of singing since he was a child.

“From a young age when Mom found out I could sing and Dad found out I could sing, I can’t ever remember not singing and being in a Winnebago driving around east Kentucky and the eastern United States,” he said. “Dad would work all day, drive all night for me to go play a show at a Girl Scout Convention or the Women’s Democratic Convention or any festival. Anywhere they would let us play, I would get up and sing.”

Tolliver said his father was in charge of the equipment while his mother acted as his manager.

“She would take care of all of the details,” he said. “My mother always had a love for music. She would play (the piano) for me at church and I would sing.”

After Tolliver was graduated from June Buchanan High School in 1993, he enrolled at the University of Kentucky with plans to attend medical school. He said he was working at a Max and Erma’s restaurant in Lexington when he decided he needed a change of pace.

“I got up at the service stand one night and I was like ‘Man, I am not happy. I don’t really feel like I am doing what I need to do,'” said Tolliver. “So I called Mom and said ‘Mom, I’m going to drop out of school. I’m going to quit my job and I am going to move to Nashville and do music again.'”

He said he got a different reaction from his mother than he had anticipated.

“I expected ‘What are you thinking?’ and what I got was ‘OK. What do you need?'” said Tolliver. “You can’t ask for more support than that. So my parents have always been there.”

He said his parents still try attend every show the duo performs.

“Every time I turn around and see their faces it just makes me smile,” he said. “I know how much they love me since I’ve had my own kids and I know how much I would support my children at anything they want to do.”

Tolliver is married to Barbara Roberts, whom he met through Warrix’s wife, the former Lori Duff of Hazard. Both couples have two small children. Tolliver has a fouryear old daughter named Dylan and a one-year-old named Madison, who will turn two on Sept. 25.

Tolliver said it is like attending a family reunion any time Halfway to Hazard plays in eastern Kentucky.

Tolliver said it is always special to play close to home.

“We’ve played all over the nation and Canada but when we get back to east Kentucky that is where our heart is and that’s where we want to be,” he said.