Hall of Fame inducts writer of ‘D-I-V-O-R-C-E,’ others 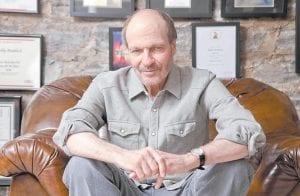 Songwriter Bobby Braddock is shown in Nashville, Tenn. Braddock, who wrote “He Stopped Loving Her Today” and “D-I-V-O-R-C-E”, was inducted into the Country Music Hall of Fame on Sunday. (AP Photo)

Bobby Braddock’s songwriting process usually starts with a title, but not all the time.

Sometimes he’s just got the germ of an idea and sleeps on it, letting his subconscious do the work. Other times the song just writes itself, forcing its way out of Braddock’s brain and into the hearts of country music fans everywhere.

Braddock, whose seminal “He Stopped Loving Her Today” and “D-I-V-O-R-C-E” offered a new dimension of heartbreak to country music, was asked about songwriting a lot leading up to his induction Sunday into the Country Music Hall of Fame. He’s just not sure he has been able to adequately explain how he does it.

“You can ask me any question you want and I’ll answer it,” Braddock says as he sits in front of his piano in his writing room. “All I’ve got to do is tell the truth. So that’s easy. But as far as writing a song, I’m not sure there is a truth.”

Braddock has written some of the most iconic songs in country music, helping to shape the genre with thoughts and themes so incisive and true they can bring tears to your eyes or make you laugh out loud.

His songs have helped define the careers of singers like George Jones and Tammy Wynette, helped bring singers like Blake Shelton and Billy Currington to the top of the charts, and continue to amaze new listeners 45 years after he first charted.

Braddock’s induction into the hall, with fellow pioneers Reba McEntire and Jean Shepard, is something of a celebration for Nashville’s vast underclass of songwriters. “It’s all about the song,” goes the cliche in Nashville. But it’s not often about the songwriters.

Braddock is the first songwriter elected to the Hall of Fame since 1997. He was chosen under a new selection format that will put an emphasis on Nashville’s most precious resource. There are just three pure songwriters currently in the Hall of Fame — Cindy Walker, Harlan Howard and the husbandwife team of Boudleaux and Felice Bryant. Braddock makes four. Now, every third year they’ll be joined by another.

News of Braddock’s induction received nearly universal praise. Toby Keith said Braddock has “been deserving of that for a long time.”

Added Currington: “He’s written so many great songs. Not just a bunch of hits, but great, wellwritten songs. And the fact that he’s being inducted into the hall of fame is right on. He deserves to be there.”

To find out why, let’s start with those song titles — like Braddock often does. They’re just a few words strung together. But even Braddock’s titles are evocative and tell a story. “Time Marches On,” ‘’People Are Crazy,” “I Wanna Talk About Me,” “We’re Not The Jet Set,” ‘’Golden Ring” are just a few of his many.

His two best known songs helped secure the legend of two country greats who always seemed to excel with his material. George Jones’ version of “He Stopped Loving Her Today,” written with Curly Putman, was so ground-shaking when it came out, it was voted the Country Music Association’s song of the year in both 1980 and ‘81 and is widely regarded as one of country’s greatest songs. And Tammy Wynette’s “D-I-V-O-R-C-E” tilted the country music world from the female perspective, clearing the way for a generation of brash and outgoing women to extend the dialogue in country.

While he has trouble describing how he gets there, Braddock says the goal is always the same. He wants each successive verse to be stronger than the last. The first verse has to grab your attention, the second has to keep it and the third should offer a big payoff. This way the song builds in intensity.

He admits that’s a nearly impossible feat, though.

“That’s why a lot of songs I write, I get really frustrated because they don’t live up to that standard,” Braddock said. “Finally I just say screw it and throw it away.”

Sometimes, though, the songs come easy. Keith’s 2002 No. 1 hit “I Wanna Talk About Me” came quickly after a frustrating conversation with a friend who was “especially loquacious that day.”

Others grow out of abstract musings. “ Time Marches On,” which Tracy Lawrence took to No. 1 in 1996, began with a trip to his childhood home in Auburndale, Fla. He noticed that all the younger adults of his youth had become old and his elder neighbors had passed on. And he saw northerners retiring to Florida a generation after he watched southerners migrate north to find jobs. These natural cycles fascinated him.

Over time he built images of children growing old in stages, parents raising a family, then passing on, and Hank Williams giving way to Bob Dylan. He notes “the only thing that stays the same is everything changes, everything changes.” There are a novel’s worth of images and ideas crammed into 3:06. Add in a hypnotic groove that seems to mark the passing of time and you’ve got a song that’s both personal and universal.

And that is what makes Braddock so great, singer and former Braddock protege Blake Shelton says. The raw material might be simple, but what comes out is sometimes simply amazing.