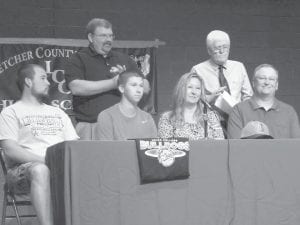 TO PLAY COLLEGE BASEBALL — Max Hall has signed to play baseball at Union College in Barbourville. Pictured with Max at a recent signing ceremony at Letcher County Central High School are his parents Gary and Janet Hall, his brother, Jake Hall, LCC Athletics Director Arthur “Ozz” Jackson, and LCC Principal Stephen Boggs. Max is a five-year member of the LCC baseball team, where as a pitcher he became the all-time leader at Letcher County Central in wins (31), innings pitched (236-1/3), strikeouts (233), shutouts (10), and complete games (16). He set the school record in wins in a season with 12 in 2013. Max pitched 44 innings in postseason play, including an eight-inning shutout in the 14th Region semifinals in 2013 vs. Estill County when he struck out 11 to lead the Cougars to a 1-0 win. Max is also listed in the KHSAA state recordbook for career wins, season wins, career shutouts, lowest season ERA.