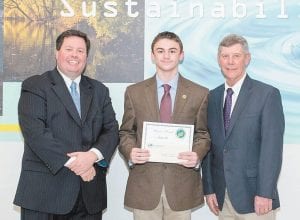 The Kentucky Association of Conservation Districts, in partnership with the Kentucky Farm Bureau, honored the winners of the 2015 Jim Claypool Art and Conservation Writing Contest.

The contest’s theme, The Wild Side of Kentucky, helped students learn more about the importance of wildlife in Kentucky.

Zachary Hall, a student at Whitesburg Middle School, was recognized as the Area 9 winner in the writing contest. His entry was one of 17,665 writing entries from 93 counties across the Commonwealth.

He was awarded a monetary gift from Kentucky Farm Bureau.