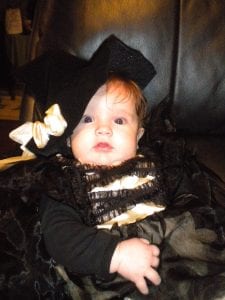 Ayla Hinkle celebrated her first Halloween. She is the daughter of Russell Hinkle and Malori Cook. Her grandparents are Mike and Betty Cook and Russell and Diana Hinkle. Great-grandparents are Alma Caudill and Maggie Cook.

Maximus Cook dressed up as Captain America.He is the son of Heath and Lora Cook. His grandparents are Mike and Betty Cook and Reese and Gloria Maggard. Great-grandparents are Alma Caudill and Maggie Cook.

Landon McCoy, of Letcher, posed for a photo dressed as Spider-Man. 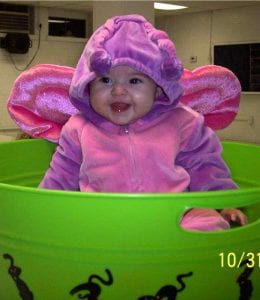 FIRST HALLOWEEN — Arieana Jade Brown is the daughter of Jordan Paige Collier and James Brown of Jenkins. She is a granddaughter of Christy Collier of Neon.

Pictured from left are Toni Kerrigan Miller as Minnie Mouse, Sawyer Cole Alexander Lucas as a duck and Owen Ray Miller as a pirate. Siblings Toni and Owen are pictured with their cousin.

Four-year-old Cooper Reed, of Burdine, dressed up as his favorite Angry Bird for Halloween. He is the son of Tony and Amber Reed.

Dylan Duncan, who dressed as a construction worker, posed for a photo with Bob and Larry from VeggieTales at a Halloween safe night at First Baptist Church in Cleveland, Tenn.

Hali Cornett, of Whitesburg, is pictured dressed as a ladybug.

Burdine resident Hannah Adams, who is pictured dressed as Rapunzel from Disney’s “Tangled” movie, stood beside her carved pumpkin after a cold night out trick-or-treating. Hannah’s costume included light-up hair.

June Quillen, of Sergent, was a good witch for Halloween.

Laci Sophia Ratliff, of Jenkins, is pictured dressed as a little ladybug.

Pictured from left are Tori Meade as Wonder Woman, Toby Meade as George Washington and Mercer Quillen as Captain America. Siblings Tori and Toby reside in Ermine and their cousin, Mercer, resides in Sergent.

Toni Kerrigan Miller, of McRoberts, who dressed up like Minnie Mouse, fell asleep after trick-or-treating. Toni, who is 19 months old, tries to sing the Mickey Mouse theme song.

Dawson Cornett, of Whitesburg, dressed up as Zorro.