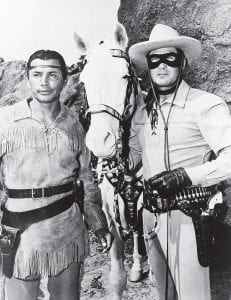 Actors Jay Silverheels, left, as Tonto, and Clayton Moore in the title role of “The Lone Ranger” are shown in a scene from the TV series in 1951. Moore delighted children of the 1950s with his hearty cry of “Hi-Yo, Silver.” (AP)

With Halloween soon upon us, I find myself remembering ways that we celebrated and/or abused, depending on your perspective, the holiday on Blair Branch when I was a youth in the 1950s and ‘60s.

Too often the so-called practice of trick or treating resulted in damages to property and people that went well beyond simple childish pranks like egging someone’s vehicle or smattering it with a rotten apple or tomato or toilet papering houses, garages and hedgerows.

High school boys and even adult men would often overturn the outhouse toilets at Blair Branch Grade School to make doing one’s business with any privacy impossible for students and teachers until the buildings could be uprighted. Grown men or very strong boys would lift the school’s merry-go-round off its spindle and prop it up against one of the big sycamore trees in the front yard and more than once it was rolled out into the road to block traffic.

That merry-go-round, constructed of numerous sturdy galvanized pipes, weighed several hundred pounds. Lifting it more than three feet vertically off the center pedestal would have required a team effort of a least four or five strong men, all old enough to know better. It was widely suspected that the culprits had not been “young” for at least a few decades. Everybody knew all the men on the holler who were not gainfully employed even though they had enough strength to do some heavy lifting. Everybody also knew the ones who had flunked out because of laziness or not being very bright before reaching eighth grade. But I don’t recall any of them ever being prosecuted for pranks like that or for felling trees across the road to make it difficult for honest people to get to work the next morning.

I do remember a couple of ne’r do wells being arrested for overturning an outhouse while the lady of the house was inside it. Her husband saw them running away, but when the case came to trial, they managed to lie their ways out of it.

Another time a couple of boys were caught in the act of placing a large paper bag of very fresh cow manure on a lady’s front porch, setting it afire, pounding on the front door and attempting to run away before being recognized. The notion was that when the lady, notorious for not passing out treats, came outside to stomp out the fire she would splatter cow poop all over herself and the porch.

As it turned out, she had been inside waiting and watching out the window for just such a trick and she had a large bucket of water waiting just inside that she used to douse the fire. She also recognized the culprits and confronted their parents the following day. The boys wound up getting whippings at home and then had to scrub and paint the “victim’s” porch.

Most of us sympathized with the boys because the “victim” was one the more prosperous people on the holler, but since her children were all grown and gone from home, she had developed a sense of intolerance for the younger generation and the only way she was apt to “treat” us was with disdain.

But for 99 percent of the people on Blair Branch, Halloween was simply good clean fun. While many of the families could not afford to hand out “brought on, store bought,” candy to the trick-or-treaters, many, if not most, made homemade fudge or gingerbread and wrapped it in folds of wax paper or they had Grimes Golden apples from a backyard tree to pass out.

And, for some reason, we always called full facemasks of witches, monsters, cartoon characters and such “false faces.” A “mask” was simply a strip of something that barely covered your eyes and you could purchase one for a nickel at either of the two little general stores on Blair Branch. False faces which, even in those days, could run as much a dollar, depending of the character one wanted to imitate, usually had to come from the five and dime store located in town, some 12 crooked miles from Blair Branch.

One year when I was in third or fourth grade or thereabouts and Truman Caudill was in fifth or sixth, we went out as The Lone Ranger and Tonto. Truman was an only child and his mom had splurged on a ranger gray cowboy outfit complete with holstered cap pistols, black mask and white cowboy hat. My Tonto outfit consisted of breeches and a top that Mom had fashioned from burlap stock-feed sacks, a rooster’s tail feather strapped to the back of my head with a rubberband, and war paint (bright red lipstick) streaked under my eyes and all over my face completed the disguise.

Truman would knock on the doors but instead of saying, “trick or treat” he would yell “Hi-Yo, Silver, away!” while I stood there scratching because the burlap was itching me half to death.

When treats were placed in our paper bags it was my job to say, “Thank you. Now let’s ride on, Kemosabe.” And we would gallop on down the road on our horses fashioned from old worn-out brooms.

The reason I remember that one so well is because Truman’s outfit came with a generous supply of plastic, silver-colored pistol bullets and he would leave one in the yard or on the porch of every home we visited.

Even months after that Halloween our neighbors would show us one of the bullets and ask, “Who was that masked man and his itching Indian sidekick?”