Hamlin gets a win for grandma 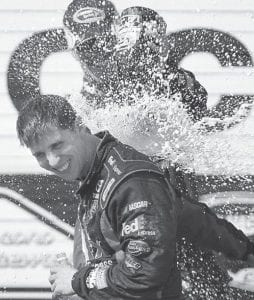 Denny Hamlin was dowsed with champagne as he celebrated in victory lane after winning the NASCAR Pennsylvania 500 auto race at Pocono Raceway in Long Pond, Pa., on Monday. (AP Photo)

Ask most drivers which track they least like to visit and Pocono Raceway is near the top of the list for most of them.

Well, except for Denny Hamlin.

Hamlin dominates the triangle track like few others have, taking the checkered flag at Pocono on Monday to snap a 50-race winless streak and win here for the third time in eight career starts.

“I told him earlier, we’re going to lobby for a few extra races at Pocono,” JGR president J.D. Gibbs said.

Hamlin got the win he needed to prove his car was just as strong as the ones at Hendrick Motorsports, and solidified his spot in the Chase for the championship.

“We’ve been the most solid car that hasn’t had a Hendrick label,” Hamlin said. “For the most part, I take a lot of pride in that. We’re taking strides starting today.”

With a heavy heart, Hamlin held off Juan Pablo Montoya over the final riveting laps at Pocono before choking up with grief in Victory Lane.

Afterward, he was in tears days after his grandmother’s death. There was a catch to his voice as he spoke, and he wiped his face with a towel before walking away for a subdued celebration. His grandmother, Thelma Clark, died Friday at 91.

“Only half of me was the driving the car most of the time,” Hamlin said.

Hamlin had few bigger fans than his grandmother. She wore her No. 11 socks, held her No. 11 stuffed bear, and watched every race on TV — even as she sat and squinted only inches away from the 30-inch screen.

“She understands the competition of the sport and she understands how much she means to me,” Hamlin said. “Like today, she’s pretty proud.”

This was Hamlin’s first victory since Martinsville Speedway in March 2008. He predicted victory and backed it up.

Hamlin, who swept Pocono as a rookie in 2006, is fifth in points and the only JGR driver in the top 12.

The race had been delayed a day because of rain. Pocono isn’t known as a track that produces exciting races, but this one was wild and unpredictable almost from the start.

Clint Bowyer was third. Sam Hornish Jr. was fourth for his best finish in a Cup car, and Kasey Kahne was fifth.

“As far as how crazy it was today, I think that’s just what the racetrack needed,” Hamlin said. “We always hear about the races here. People aren’t big fans of the racing. But they had a great race today.”

Three-time defending Cup champion Jimmie Johnson battled an unruly car all day, falling three laps down and needing a carburetor change with 60 laps left before rebounding with a solid 13thplace finish. Johnson was scheduled to visit with President Barack Obama on Monday in honor of his 2008 Sprint Cup title.

Tony Stewart, who won Pocono in June, finished 10th and increased his points lead to 197 over Johnson.

Montoya rebounded nicely after the crushing disappointment of losing a victory last week at Indianapolis because of a pit road speeding penalty. Montoya insisted when he got to Pocono that he had moved on and kept his eye solely on the points standings. He went from 10th to eighth in the standings and is in good shape to make the Chase for the first time.

Bowyer, who wasn’t won in 47 races, moved up to 15th in the Chase standings. There are five races left before the 12-driver field is set for the 10-race sprint for the title. Hamlin had a rare poor outing in the June race at Pocono because of a fuel pump problem that sent him to the garage after only two laps. He returned and finished 38th, but has been one of the hottest drivers over the last seven races.

Hamlin recorded four top fives over that span and did all he could to move up the standings — except win.

The Hendrick cars were mostly out of the picture over the final laps, leaving a pack of drivers who haven’t contended for many checkered flags this year going for the win.

Montoya, Bowyer and Hornish are all winless, and Kahne has one victory.

Fueled by emotion, Hamlin scrapped any ideas of a conservative approach for points and raced hard for the win. One member of Hamlin’s crew recently lost his mother, and the whole team was mourning. Hamlin couldn’t keep his emotions in check thinking of how proud his grandmother would be of him.

“She would always tell me she put out a prayer to St. Jude for us this weekend,” Hamlin said. “She was a big fan of mine.”