Hamlin, Harvick won’t back down 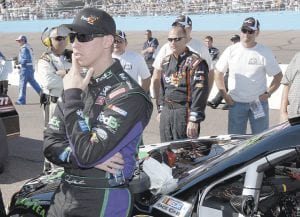 Gamesmanship was in full swing this week as two of NASCAR’s three championship contenders, Denny Hamlin and Kevin Harvick, teased racing fans with tweets about how they’re approaching this weekend’s season finale.

Hamlin appeared to shake off the heartbreaking turn of events at Phoenix International Raceway by the time he got home to North Carolina, insisting that as the points leader, he’s still in control. Harvick, saved from a potentially crippling mid-race penalty, seemed to be chomping at the opportunity to play the spoiler.

And both drivers bristled at three-time champion Darrell Waltrip, who suggested via a tweet that Harvick and Hamlin will have a very difficult time beating fourtime defending champion Jimmie Johnson and his Hendrick Motorsports team.

“We shouldn’t even show up if we are up against that!” Hamlin retorted sarcastically on Twitter.

“You still get a check from Hendrick?” Harvick fired back at Waltrip, who drove four seasons for team owner Rick Hendrick.

Johnson was the only driver out of the fray, and probably not even aware of the social media activities of the two drivers trying desperately to end Johnson’s reign. He learned five years ago, when he found himself too consumed with points leader Tony Stewart, that paying attention to anything but his own task at hand was a total waste of time.

Once he removed himself from the mind games and the daily drama of a grueling 36-race season, his mind was clear and he focused only on what he alone had to do each week. The payoff has been his historic four-year run, and a totally relaxed attitude as Johnson heads into what’s essentially the biggest race of his career.

The 15-point margin Hamlin holds over Johnson makes Sunday’s race at Homestead-Miami Speedway the closest finale since the Chase for the Sprint Cup championship format was introduced in 2004. That was one of only two years that the finale mattered to Johnson, who since 2006 has gone into the final race with the championship well in hand.

Now he’s the hunter for the first time since, and after poor fuel strategy prevented Hamlin from taking a commanding lead Sunday in Phoenix, Johnson believes he’s actually in the driver’s seat toward a fifth title.

Hamlin, who led a racehigh 190 laps Sunday and probably should have finished no lower than second, actually finished in 12th when he and his team incorrectly guessed that everyone else’s fuel mileage was as bad as what they were getting on the No. 11 Toyota. It erased what could have been a lead of almost 60 points, and Johnson wasted no time reveling in the fact that the pressure is now on Hamlin.

“I hope being on his heels really works on his mind throughout the week, he and his crew,” Johnson said. “Those guys better be on their toes. Nine years being in Cup, I’ve lived in championship pressure, especially the last four years. I know how bad he wants to win a championship. I also know that this is going to be a tough week for him, because I’ve been there.

Johnson doesn’t have any idea how Hamlin is handling it because he deliberately waited outside of Hamlin’s post-race news conference instead of joining him on the podium, as is routine. He said he did it to shield himself from Hamlin’s thoughts and feelings, which needed no words after his Joe Gibbs Racing team gave away a major opportunity.

Hamlin’s flushed face and look of bewilderment after he climbed from his car said everything anyone needed to know about his setback. His initial postrace answers were brusque and his stare somewhat vacant. But as the session went on, his fiery attitude came back, and he vowed not to crumble in the face of adversity.

There would be no need, he insisted, to sit down with boss Gibbs, the three-time Super Bowl winning coach and motivational speaker.

“Trust me, when I get home, I’m done with it,” he insisted. “I am going to try to figure out how to win next week. This is fuel for me.”

Same for Harvick, who was flagged for a missing lug nut during a late stop and the penalty dropped him from fifth to 18th. Initially upset on his team radio, he composed himself and his on-track position gave him a chance for a second pit stop that Hamlin and Johnson couldn’t afford.

It meant Harvick had enough gas to get to the finish without conserving — a luxury Hamlin didn’t have, he had to pit with 14 to go, while Johnson backed off over the final 25 laps to save enough to get to the finish — and Harvick just about drove his wheels off to salvage a sixth-place finish.

He’s just 46 points out, and took time Monday to reflect on the 2007 Trucks Series championship, when Ron Hornaday overcame a 57-point deficit in the season finale to give Harvick his first owner’s championship.

“We have been here before!” Harvick boasted.

Harvick also has relished playing the spoiler role over the last several weeks, and has settled into a go-forbroke attitude. The worst he can do is finish third, and the championship is well within his reach.

With all the jockeying, on the track and off it, the title run has turned it into the most exciting stretch of racing in several years. Waltrip, for his part, wasn’t backing down from his belief that Johnson is still the driver to beat.

His Twitter feed went silent for nearly three hours after his claim about Johnson, but he popped back up after Hamlin and Harvick bristled at Waltrip’s support of the champion.

“Looks like the boys woke up while I was gone to lunch,” he tweeted. “Now if they’ll take their attitude out on JJ they might be able to dethrone him.”