Hamlin prepared for a run at title 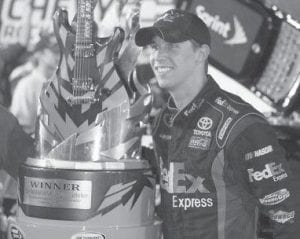 Denny Hamlin set his mind on a championship during the offseason, when he vowed to make the personal changes needed to make this a breakthrough season.

OK, so maybe he’s still a little bit moody. And when he’s struggling, he’s still prone to take it out on his race team.

But something has definitely clicked this season and Hamlin is now in position to take the next step in his career.

His confidence was soaring even before his long-awaited victory at hometrack Richmond International Raceway — a win that has Hamlin steamrolling his way into the Chase for the championship convinced he can win his first Sprint Cup title.

“We’re the ones to beat right now,” Hamlin said before leading 299 of 400 laps in Saturday night’s victory.

“We’re the only ones that can beat ourselves.”

Hamlin and the No. 11 team certainly did that over his first three seasons. He led laps, won races and made the Chase every season, but they just couldn’t mount a legitimate title run. There were mechanical failures, driver blowups and pit crew mistakes that always seemed to interfere with Hamlin reaching his goals.

So he started the year focused on turning a corner.

“What I don’t like to hear is: ‘You’ve got a lot of potential,’ ” Hamlin said in January. “It’s my fourth year. It’s time to be a champion. Not a guy that contends.”

Now it’s time for Hamlin to prove it.

He heads into this weekend’s Chase opener at New Hampshire seeded fourth in the standings, just 20 points behind leader Mark Martin. More important, his mindset is clearly changed as he moves into what his Joe Gibbs Racing team believes is the most important part of the Chase for Hamlin.

Although he was competitive in his 2006 rookie season, when he finished third to winner Jimmie Johnson, he was out of it by Week 3 the past two seasons. So the goal this year is to make it through New Hampshire, Dover and Kansas still near the top of the standings.

Hamlin was 10th after Kansas last year, already 243 points out of the lead. In 2007, he dropped to 12th, never recovered and finished last in the field.

Crew chief Mike Ford needed a way to get Hamlin off to a fast start this season, and made Richmond the key to his plan.

He grew up in Chesterfield, Va., and sat in the stands at RIR as a child rooting on hero Bill Elliott. The are bigger tracks and more prestigious races on the Sprint Cup schedule, but Hamlin has only ever cared about Richmond.

He finished second in his RIR debut, and third a year later. Then the win was in the bag in May, 2008, when he led 381 laps but a late tire problem ruined his rout. Hamlin was a devastating 24th.

There was more heartbreak this past May, when he led 148 laps but dropped lug nuts on a late pit stop again took him out of contention.

So Ford made a decision. He figured Hamlin would clinch a Chase berth a week earlier at Atlanta, and Richmond would have no consequences on their championship eligibility.

If it worked, and Hamlin was able to grab his coveted win, he’d have all the momentum he’d need to start the Chase.

So they built their car a month early, and told Hamlin it was their very best Toyota, and he was going to win the race. It would take some patience on his part — Ford explained that Hamlin couldn’t charge out of the gate in an effort to lead every lap and embarrass the field. He’d instead need to let the race play out and simply be in position at the end.

If he followed the plan, he’d get both his Richmond win and leave Virginia on a high he could take with him into the Chase.

He was ecstatic as he claimed the checkered flag, shouting “This is my house!” over his radio. Then, in a nationally televised Victory Lane interview, he warned his competition he’s going for the title.

“They better watch us,” he declared. “I am telling you, this team is dangerous.”

The next 10 races will show if Hamlin was right when he predicted a big season. And it’s going to take some commitment from JGR, as well.

Busch has promised to help Hamlin any way he can, but there will certainly be a behind-thescenes push to help Busch save face with a strong close to the season. But Hamlin is going to need some help to indeed be the guy that takes down three-time defending champion Johnson.

He thinks he can do it.

“We go into each season hoping to win a championship,” he said. “We haven’t had championship caliber finishes except for our rookie year. But I feel now our performance on the race track is better than it has ever been in my career. We are bringing good cars to the track and being competitive and competing for race wins every week.

“That’s something we didn’t have in our rookie year when we were racing for the championship. I think it kind of sets up nicely for us.”