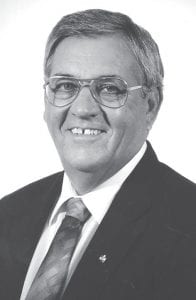 Born in Whitesburg, he was a son of the late Lester and Effie Hammock. He was preceded in death by his sister, Ella Kaye Collins, and daughter-in-law, Kathy Hammock .

During various times of his life he lived in Whitesburg; Louisville; Broken Arrow, Okla.; Carrollton, Tex., and Wenatchee, Wash. He was retired from Frisco/ Burlington Northern Railroad where he had worked for 35 years.

Mr. Hammock officiated high school sports for 40 years and received the Distinguished Service Award from the National Federation Interscholastic Officials Association in 1994. One of the highlights of his career was officiating in the Down Under Bowl Games in Gold Coast Australia. He officiated the Oil Bowl All Star game and Oklahoma 5A state football games. After officiating in more than 10,000 games in both football and basketball, he was inducted into the Oklahoma Officials Hall of Fame in 2004. He also ran the scoreboard at Tulsa University for 20 years.