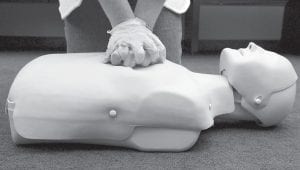 Two new studies conclude that “hands only” chest compression is enough to save a life. The American Heart Association has been promoting “hands only” CPR for two years, though it’s not clear how much it’s caught on. The new studies should help, experts say. (AP Photo)

More bystanders are willing to attempt CPR if an emergency dispatcher gives them firm and direct instructions — especially if they can just press on the chest and skip the mouth-to-mouth, according to new research.

The two new studies conclude that “hands-only” chest compression is enough to save a life. They are the largest and most rigorous yet to suggest that breathing into a victim’s mouth isn’t needed in most cases.

The American Heart Association has been promoting hands-only CPR for two years, though it’s not clear how much it’s caught on. The new studies should encourage dispatchers and bystanders to be more aggressive about using the simpler technique.

“That could translate into hundreds if not thousands of additional lives saved each year. What are we waiting for?” said Dr. Arthur Kellermann, a RAND Corporation expert on emergency medicine.

An estimated 310,000 Americans die each year of cardiac arrest outside hospitals or in emergency rooms. Only about 6 percent of those who are stricken outside a hospital survive.

When someone collapses and stops breathing, many people panic and believe that phoning 911 is the best they can do to help.

The larger of the two new studies reported survival rates of about 12 percent when bystanders did dispatcher directed CPR, confirming earlier research that on-scene CPR can dramatically increase a victim’s odds of survival.

Previous research has suggested that adults who need CPR get it only about one-quarter to one-third of the time when bystanders are around.

One of the new studies found that when dispatchers told callers to start CPR, about 80 percent attempted it when given hands-only instructions, more than the 70 percent who tried the standard version.

Sayre and others credited the increase on dispatchers who immediately told callers what to do, instead of first asking them if they’d had CPR training or if they’d be willing to try it until medical help arrives.

“This study shows that with great training and motivation, the 911 call taker can make a big diff erence,” Sayre said.

CPR, or cardiopulmonary resuscitation, is a technique that’s been in use for about 50 years. The standard version now calls for alternating 30 hard pushes on a victim’s chest with two quick breaths into their mouth.

The aim of CPR is to do some of the mechanical work of the heart by forcing at least some blood and oxygen to the brain and other vital organs.

Experts have come to believe that pumping is what’s most important in most adult cases, and advise doing chest pushes continually at a rate of 100 per minute and skipping the mouth-to-mouth. Some suggest using the beat of the old disco song “Stayin’ Alive” as a guide.

Cardiac patients do as well or better when they got hands-only CPR as compared to the traditional version, these and earlier studies have found.

One of the new studies, carried out in London and the Seattle area, involved more than 1,900 people who witnessed someone in cardiac arrest and called 911 or some other emergency number. Emergency dispatchers instructed callers to do either hands-only CPR or an older form of standard CPR that alternates 15 pushes with two quick breaths.

The second study was done in Sweden and included nearly 1,300 people.

In both studies, there was no significant diff erence in the survival rates of people who got conventional CPR and those who got the hands-only version.

The studies were published in the July 29 edition of the New England Journal of Medicine.

While there is no good national data on how often hands-only CPR is used, Dr. Ben Bobrow, who directs the Arizona Department of Health Services’ emergency medical system, believes it is catching on.

“We’ve seen a huge trend in hands-only CPR in Arizona and I believe that trend is spreading across the country. I think these findings will further promote that,” he said.

Many people think of traditional CPR as difficult, and to some extent it is. The victim’s head has to be tilted back, the airway cleared, the nose pinched and the mouth completely covered with the rescuer’s. A lot of people have trouble with it, said Don Pederson, a dispatcher in Seattle’s King County, who participated in the U.S. study.

“A lot of the times they weren’t getting air in there correctly,” with oxygen escaping out the sides of the mouth, Pederson said.

Rea and his colleagues believe some bystanders perform mouth-to-mouth so poorly that the interruption reduces blood flow.

Worry about doing CPR correctly was the No. 2 reason many people don’t attempt it, according to a Michigan study published in 2006. The No. 1 reason? People are too panicked.

The “ick” factor of putting lips to a stranger’s mouth — and picking up the stranger’s germs — was cited by only a tiny fraction of people in the study. However, it may be a more significant issue than the study showed, at least in some communities, experts say.

Traditional CPR is still the preferred form of resuscitation for children or adults who have stopped breathing because of choking, drowning or other respiratory problems.