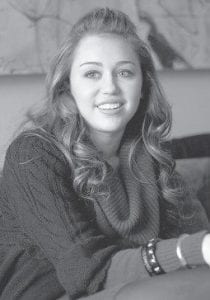 The body double was only on stage for a few seconds, and the switcheroo was relatively innocuous.

But since it involved the “Hannah Montana” show – the sold-out tour for which tickets have been scalped for hundreds of dollars – even the use of a brief stand-in for its star, 15-yearold Miley Cyrus, was enough to cause plenty of buzz when video of the switch was posted on the Internet.

“This tour is such a phenomenon everybody is trying to find some angle to write about it,” said Gary Bongiovanni, editorin chief of Pollstar, the trade publication that tracks tours. “This tour was the phenomenon of 2007 and it’s still going strong in 2008.”

A video posted on YouTube shows the 15-year-old entertainer, who stars on the hit Disney TV show “Hannah Montana,” onstage as her character, dancing and singing onstage with a group of dancers and the Jonas Brothers, also on the “Hannah Montana/Miley Cyrus ‘Best of Both Worlds'” tour.

During the song, someone ushers her offstage via a trap door. Immediately, another girl dressed like the character “Hannah” in the same pink trench coat with blonde hair covering her face dances around, runs up stairs on the stage set and then quickly leaves the stage.

While the double is holding a microphone for her less than a minute, the girl motions like she is singing. However, a rep for Miley said the switch was only for costume purposes.

“To help speed the transition from Hannah to Miley, there is a production element during the performance of ‘We Got the Party’ incorporating a body double for Miley,” according to statement from the public relations firm PMK, which represents Miley.

“After Hannah has completed the featured verse on the duet with the Jonas Brothers, a body double appears approximately one to two minutes prior to the end of the song in order to allow Miley to remove the Hannah wig and costume and transform into Miley for her solo set. Other than during this very brief transitional moment in the show, Miley performs live during the entirety of both the Hannah and Miley segments of the concert.”

Some fans were supportive, but others decried the body double as fakery. But Bongiovanni, who said the use of body doubles is not uncommon in touring shows, said there was nothing dishonest about it.

“It takes a few moments at least to change costumes, and they are trying to do it to give you the almost ‘David Copperfield gee-whiz’ effect,” he said. “There are absolutely laws of physics that prevent you from doing geewhiz things without some hocuspocus.”

Miley’s “Hannah Montana” tour is one of the nation’s hottest tours, selling out within minutes when tickets went on sale last fall. While some lucky fans were among them, some were ticket brokers who have resold tickets for hundreds, even thousands of dollars on Web sites.

Some parents were willing to pay up to satisfy their children; others complained about the difficulty of getting tickets. And one parent did the unthinkable, helping her 6-year-old daughter write an essay claiming her father died in Iraq in order to win a contest for concert tickets. The prize was stripped away once the truth was revealed.