‘Hannah Montana’ is one hot ticket 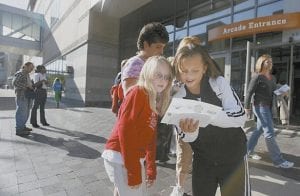 Fans are so desperate for seats to her 54-date tour, kicking off later this month, that venues have sold out in as little as four minutes and scalpers are getting four to five times the face value – creating a torrent of complaints from frustrated parents.

“We knew it was hot, but we had no idea it was this crazy,” said Debra Rathwell, senior vice president of AEG Live, which is handling her tour. “It’s like the Beatles.”

About 12,000 seats for the Memphis show were gone in 8 minutes. It took 15 minutes in Columbus, Ohio, and swift sellouts have been reported across the country – Nashville, Miami, Lexington. The Kansas City Council is investigating the matter.

In Arkansas, Attorney General Dustin McDaniel announced an investigation of the Hannah Montana ticket sales last month after reports of a quick sell-out and scalping. 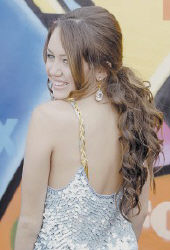 A news release from McDaniel’s office said that, only a few minutes after sales of the tickets began, consumers at the box office and those who went to the Ticketmaster web site were told that the concert had sold out.

The sold-out “Best of Both Worlds Tour,” which begins Oct. 18, follows the release of her double album, “Hannah Montana 2/Meet Miley Cyrus,” which has already sold more than 1 million copies since its release in June. The first album, released late last year, sold more than 2 million copies.

Paige Nace, 35, hoped to take her daughter to see Miley at the Arena at Gwinnett Center outside of Atlanta. Nine-year-old Arianna had been begging to see her live ever since she started watching the show, Nace said.

“I think that’s it’s pretty cool she is coming here,” Arianna said. “I want to get up on stage and sing with her. Most likely every girl I know likes Hannah.”

But in 4 minutes, tickets to the November show were gone. Nace said tickets were being resold for inflated prices on Internet sites like Craigslist and eBay Inc.’s ticket-reselling subsidiary StubHub.

“All the ticket brokers and scalpers are trying to sell them for $100-200 a piece,” Nace said. “If they would have been face value, I would have gladly gotten them.”

The tour promoter capped prices at $65 and put a four-ticket maximum on each transaction. However, the average ticket for the Hannah Montana tour was being resold for $214. That beats the average resale price for Timberlake ($182), Beyonce ($193), or The Police ($209).

The Police tour has been StubHub’s best-selling tour in the company’s history, but Hannah Montana has sold 35 percent more tickets in the same amount of time, and is outselling The Police by 25 percent based on dollar volume.

“It’s always been a problem and it getting worse and worse,” said Rathwell, who says her company is doing all it can to reduce scalping. But with every show selling out immediately, there are few options for parents.

“Hannah Montana has essentially exposed a lot of frustration the average, uninformed ticket buyer has,” said Sean Pate, a spokesman for the San Francisco based StubHub. “There is so much demand that ticket sellers are pricing on the high side. It’s almost unreasonable.”

As technology changes and more venues start selling tickets online, scalpers are no longer those shady looking guys holding up tickets outside the arena. Most states have no restrictions on reselling tickets, even for a big profit.

Ray Waddell, Billboard’s touring writer, says scalpers use automated computer programs that buy tickets quickly or tie up ticket phone lines with repeated calls. “It’s really getting out of control,” Waddell said. “The industry is kind of fed up.”

Pate encourages Hannah Montana fans to sit tight and wait for prices to go down as the tour dates approach.

“The prices that you see now are not the prices that are going to hold,” Pate said. “Parents need to set a price that they are comfortable with and watch the market on a daily basis.”

Nace is refusing to deal with scalpers at all, but the situation has left both her and her daughter disappointed. “My mom is trying to do everything she can to take me,” Arianna said. “I’m still going to listen to the CDs.”

“I feel like they are ripping off children,” Nace said. “I’m sure there are parents out there would pay that much. But the rest of us shouldn’t be penalized for that.”