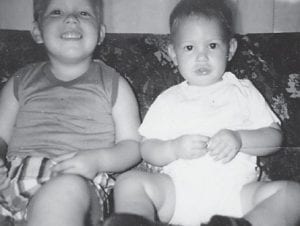 On February 26th, 1971, the home of Relon and Adeline Hampton was blessed with the birth of a blue-eyed bouncing baby boy. Like his brothers, he weighed in at over 8 pounds. They named him Steven Brian. He was a special child from the day he was born, because he was always jolly. Unless he was hungry or needed an oil change (diaper) he was smiling. He had a smile which seemed to light up everything around him. He always wanted to share anything he had, his toys, or even his food, and would say bite bite. When he learned more words, it turned into wanna bite. But no matter how it came out, he always wanted to share, especially something to eat, even his sweets. One of his favorites was Chocolate Gravy. He and his older brother were like to peas in a pod. If you saw one, the other one wasn’t far away. As he grew older, his friends call him Steve. He had a heart of Gold, with Love and Compassion for everyone and everything. Because he felt that God wanted it that way. And he kept this attitude as long as he lived. Friday night, December 14th, 2012, about 12:30, that heart of Gold stopped beating and our bundle of joy went to be with Jesus, leaving all his sorrow, pain, worries and troubles behind. His leaving was sudden and unexpected, without a chance to say Goodbye. But we’ll see our bundle of joy again, when we ALL stand before the Mighty Throne of God, and be Judged according to the Deeds done in the flesh.

The family and friends of Steven Hampton