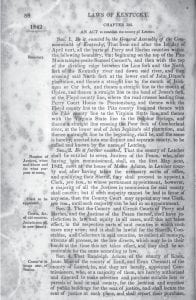 THIS PAGE FROM the Acts of the General Assembly of the Commonwealth of Kentucky: Passed December Session, 1841, holds the beginning of the law that created Letcher County. Passed in March of 1842, it set an April 1 date to take effect, forming Letcher from parts of Perry and Harlan.

178 years ago, our county was formed from Harlan and Perry.

There may be no crowd of revelers to help celebrate, but Letcher County residents stuck at home today could take the time to bake a birthday cake and light some candles.

You might be careful with those candles, though. There will be 178 of them. You see, April 1 is the birthday of Letcher County.

We’ll make no comment about the appropriateness of April Fools’ Day — take from that what you will — but what better time to pull out the noisemakers and act the fool? (Appropriately socially distanced, of course.) On this date in 1842, Perry and Harlan counties officially gave up part of their land to create Letcher.

The boundary lines have changed since then — the Linefork area is now part of Letcher; Carr Creek and Ogden aren’t — but that one phrase still stands. “One distinct and separate county.” Could any description be more apt?

Much of the history of the county’s creation has been lost to time and the confusion of namesakes and family histories.

The conventional assumption has long been that it was named for Gov. Robert P. Letcher, the popular, jovial Whig, whose portrait hangs in the Letcher Circuit Courtroom. But the reasoning behind naming the county is not mentioned in the Journal of the Kentucky House of Representatives or in the Acts of the Kentucky General Assembly. State Rep. Daugherty White, who represented Clay and Perry counties at the time and pushed many bills to benefit the new county, also had a brother-in-law named Dr. William Robertson Letcher, who may or may not have been a brother to the governor.

Another popular story is that when the General Assembly officially named the county seat in January 1843, it was named it for John Daugherty White. But John Daugherty White, an ill-tempered, one-term Congressman from Clay County, wasn’t even born yet.

His uncle, however, John White, was Speaker of the U.S. House of Representatives at the time the county was formed, and as such had the power to ensure passage or defeat of bills to create post offices and post roads, vital to new cities. State Rep. Daugherty White was a brother of the Speaker and an influential legislator, shepherding many bills benefitting Letcher County through the state House. The White family as a whole was influential, running a salt works in Clay County that once was planning a system of canals from Manchester to the Atlantic Ocean. They were also involved in a decades-long shooting feud with rival salt barons the Garrards, descendants of the state’s second governor.

Unfortunately, no records seem to remain that would enlighten historians about the true origins of the name, or much else. Commissioners from Knox, Estill and Laurel counties were appointed by the legislature to find and buy property for the county seat. After narrowing the choices to Mayking and what may have been called Summit City, they chose the present site, and the county court bought it. The order book showing what happened is missing, presumably either lost or destroyed when the County Clerk fled during the Civil War, taking as many records as he could carry. The only thing left that is readily available is a one-sentence law: “Be it enacted by the General Assembly of the Commonwealth of Kentucky, That the county seat of Letcher shall be called Whitesburg.”

And light a candle or two. Just don’t blow on the cake.