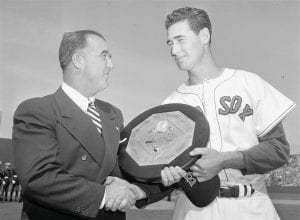 SIXTY-NINE YEARS AGO — On October 29, 1945, former Kentucky Governor and U.S. Senator A.B. “Happy” Chandler, shown here presenting Boston Red Sox slugger Ted Williams with the American League’s most valuable player award, resigned his seat in the U.S. Senate to devote his full attention to his job as Major League Baseball Commissioner. While Chandler continues to be recognized for his role in helping Jackie Robinson and other African-American stars of the era to break baseball’s color line, he was unpopular with many of the game’s elite. According to author William H. Marshall Jr., Chandler remained in the Senate for several months after his selection as baseball commissioner because he wanted to vote on the Charter of the United Nations. Marshall writes in “Happy Chandler and Baseball’s Pivotal Era” that many team owners loathed Chandler, believing that his Southern drawl and frequent singing of “My Old Kentucky Home”were too undignified for a man holding such a high position. Chandler also infuriated owners by moving the Major League Baseball offices from Chicago to Cincinnati. (AP photo)