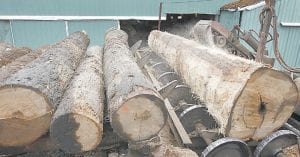 Global economics and the housing bust are throwing a relentless string of problems at the mom-and-pop sawmills and logging companies that make up much of the nation’s hardwood lumber industry.

Large furniture makers have abandoned the U.S., a growing number of raw logs are being shipped overseas for processing and changing consumer tastes and construction downturns have slashed demand for hardwood flooring, trim and red oak, long the dominant species.

The result has been rising unemployment for forestry workers and a sharp decline in hardwood production. Government statistics show production has dropped from 12.6 billion board feet in 1999 to about 10.7 billion last year.

“I don’t even think the numbers demonstrate how bad it is,” Luppold said. “We haven’t seen this amount of decline year in and year out since the early part of the (20th) century.”

The industry’s problems started more than a decade ago when U.S. furniture makers started leaving the Carolinas in favor of foreign destinations with cheaper labor and lower operating costs.

Shutting down isn’t an option for Tony Woodyard of Twin River Hardwoods Inc. Woodyard says he has to keep running his mills to pay the debt he took on to buy them in 2006.

“The prices are, they’re where they were 20 years ago,” says Woodyard, who has more than two decades in the business. “To be profitable you’ve got to watch all your P’s and Q’s and eliminate all the fat in the payroll.”

Prices vary by factors such as species and grade, as well as negotiations with buyers, but Woodyard says the price of cabinet grade lumber has slumped in some cases to $900 for 1,000 board feet. For years that price was $1,200 and at times as much as $1,400.

People in the industry say the formerly booming housing market masked problems for a while by creating demand for hardwood cabinets, trim and flooring. That bubble burst with the housing market’s free fall.

“Even though furniture was going down dramatically, we had kind of a buffer there with these other industries going up,” Luppold says. “As soon as the housing market cooled, these industries started having problems.”

Problems such as a series of temporary shutdowns for Facemyer Lumber’s Ripley mill and others across Appalachia.

“We’ve been on a downturn for about four years now,” owner Les Facemyer says as he ticks off a list of lumber operations in the same boat, including a veneer plant in Spencer and two Roane County mills.

“It’s starting to snowball,” he says.

“The industry is shrinking,” Inman says. “I could cite probably a dozen that I know of sawmill closings of mills of prominence … the value of the timber vs. the price that they’re able to get for the lumber is too tight or it’s a loss.”

Bureau of Labor Statistics data reflects how the industry is shrinking.

Another problem lurking in the background is an unfortunate shift in consumer tastes.

Homeowners once wanted red oak, the most common hardwood in much of Appalachia. Now, lighter-grained species, especially maple and poplar, are in vogue.

“My wife’s 35, she doesn’t want red oak because her mother had it,” says mill operator Scott England. “The biggest item that we make here, that we used to make money on has dropped by 35 percent.”

That drop extends beyond England’s home base of West Virginia to Arkansas, Louisiana, Mississippi and Virginia, all of which have lots of red oak.

Luppold looks around the industry and sees mill owners and loggers just trying to hang on. People who used to boast about profits brag about how they’re able to stop the bleeding, he says.

“I don’t know of anybody that’s turning any respectable profit.”

In the short term, however, the industry is showing signs of adapting.

“They’ve started doing unnatural things for them like getting together with other mills to work on filling orders more efficiently,” Luppold says. “It wasn’t a behavior that you saw before.”

Long-term, Buehlmann, a Swiss native, thinks Europe may have a solution. Surviving Western European mills have shifted to made-to-order furniture and cabinet manufacturing.

“They’re pretty much customizing the kitchen to your specifications,” he says. “I strongly believe this will be the guide.”

England has another solution: ban log exports and make China buy lumber from the only place in the world with vast and expanding hardwood forests.

“They can’t get it anywhere else,” England says.