By ROGER ALFOR The Associated Press 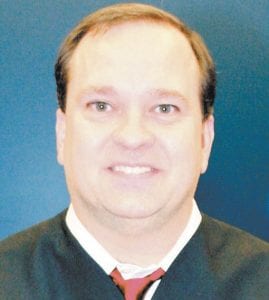 A Harlan County judge faces judicial misconduct charges accusing him of ordering a grand jury investigation against a local offi- cial in an effort to discredit him politically, according to documents released Tuesday by the Judicial Conduct Commission.

Judge Russell Alred is also charged with a variety of other ethical misdeeds that could lead to a public reprimand and force him from office if proven in an administrative hearing that’s yet to be scheduled.

Overall, Alred faces 20 counts alleging ethics violations, including misconduct in office and violations of the code of judicial conduct. They are not criminal charges.

“It’s all politically motivated by individuals who worked diligently against me in my 2006 election,” Alred told The Associated Press on Tuesday. “And they have conspired, encouraged and prompted numerous false allegations to be made against me.”

Among the more eyecatching charges, the judicial panel said Alred had tried to politically weaken Harlan County Judge-Executive Joe Grieshop by ordering the grand jury investigation into allegations of drug trafficking in his office. That investigation was ordered less than a month before a Democratic primary that pitted Grieshop, who was seeking re-election, against Alred’s cousin, Denny Pace.

Stephen D. Wolnitzek, chairman of the Judicial Conduct Commission, charged in the complaint that Alred also had required criminal defendants last year to donate $500,000 to the Harlan County Fiscal Court to pay for a water park. By doing so, Wolnitzek said, Alred violated judicial rules, including the failure to uphold the integrity of the court and to avoid the appearance of impropriety.

The judicial panel alleges that Alred had told the local prosecutor that if he didn’t get two criminal defendants in unspecified cases to forfeit $1.2 million in bail that he would dismiss the cases against them.

In disposing of the case, Wolnitzek said in the complaint, Alred allowed the defendants to make a donation of $500,000 to the fiscal court to help combat drug abuse. That donation came with the stipulation, the judicial panel said, that the money could be used only with approval of Alred.

That was the money that Alred allegedly wanted to be spent on a water park.

Among a litany of other misconduct charges, Wolnitzek also claimed that Alred had improperly threatened a state social worker with a grand jury investigation or indictment, had used his influence to urge the Harlan County Fiscal Court to hire his cousin as a drug court employee, and had engaged in fundraising from companies and individuals for the purchase of playground equipment at a local school.