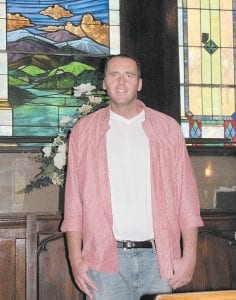 Heroes come in many shapes and sizes.

Standing 6 feet 11 inches tall, Tony “T.J.” Brewer Jr. fits that bill and is an inspiration to all who come in contact with him.

Diagnosed at the age of 24 with a brain tumor and given just a few months to live, the Kenvir resident has outlived his diagnosis by almost nine years now.

“I was sent home with a little pamphlet detailing the stages of dying,” said Brewer. “I told the doctor I wasn’t dying, and he told me I was in denial. He told my mother to have me an early birthday party because I wouldn’t live to see age 25. Here it is almost nine years later and I’m still going strong.”

At age 33, and with five brain surgeries behind him, most recently having a pump inserted into his brain to pump spinal fluid off his brain, Brewer continues to be positive about living and life.

“I pretty much live a normal life,” said Brewer. “My brother and I run Brewer’s Gym in Verda where I’m a trainer. I work with a lot of middle and high school students free of charge hoping to help them get scholarships through athletics. I always have prayer with the kids and try to teach them a Godly lesson through the workouts we have together.”

An ordained minister, Brewer travels to different churches, First Priority clubs and other locations as a motivational speaker. A member of the River Ridge Baptist Church, Brewer said anything he can do for the Lord that he is going to do it.

Graduating from Evarts High School, Brewer attended the University of Virginia at Wise at Norton, Va. Later he enlisted in the U.S. Army, where he served his country for a period of six years before suffering a stroke and becoming disabled.

“When I had my first stroke is when they found the brain tumor,” said Brewer. “They told me it left me 30 percent brain dead. They have continually cut away at the tumor, but the type of tumor I have is large and inside my brain and can’t be totally removed. They have removed 30 percent of my brain so far. This type of tumor survival rate is listed as 1 percent.”

In a wheelchair for six months, Brewer said he is now able to do most things others do.

“I help coach basketball at Black Mountain Elementary School,” said Brewer. “I used to do a free senior citizens exercise class. I’m praying about starting a charity for children who are handicapped and unable to participate in sports. I’d like to be able to teach them ways to exercise and buy them all jerseys so they will know what it feels like to be a part of a team. I’d like to host games for them to compete in and hopefully make a difference in someone’s life.”

Defying a death sentence from the doctors, Brewer said he appreciates all the prayers, emails, letters and cards he has received during his surgeries and illness.

“Never give up,” said Brewer. “If the doctors give up, you have to go to the great physician — God. He can heal our problems, whether it be cancer, a broken heart, financial or loneliness no matter how great or small God is always able to help.”