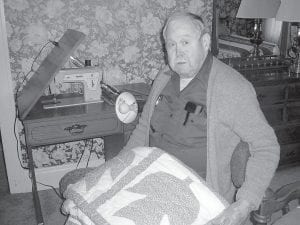 Wendell Griffith displays one of his favorite quilts he made with his leaf pattern. “My mother taught me to quilt,” said Griffith. (AP Photo/The Daily Enterprise, Nola Sizemore)

There’s an old saying “the apple doesn’t fall very far from the tree.” It means the characteristics of one generation are often visible in the lives of their children which is the case for 81-year-old Wendell Griffith, of Harlan.

“My mother taught me to quilt,” said Griffith. “Back when I was raised up, everyone was poor but you didn’t know it. There were six of us kids, three boys and three girls. My mother didn’t believe in just sitting around. She taught us kids to work, both girls and boys. She made quilts and sold them most of her life.”

Griffith said it might sound unusual to some people that a man would do quilting, but in his family it just wasn’t that unusual.

“I was laid off from the coal mines back in the 1980s,” said Griffith. “Mother said to me one day just sit down here and I’ll show you how to quilt. I did just what she said. I caught on real quick. The only trouble was I didn’t have a sewing machine and I told my mother that. She told me not to worry because she would take care of it and she did. I still have my first sewing machine my mother bought me. I wore it out.”

Griffith said while he was out of work he made quilt tops and sold them for $35 each.

“Quilting helped me out when I was laid off from the mines,” said Griffith. “I went back to work and just kept quilting. Now it’s a winter-time hobby for me. I usually make 10-14 quilts a year.”

Griffith said two years ago he entered one of his baby quilts in the Polk Sallet Festival quilting contest.

“I won second place,” said Griffith. “That was the only time I ever entered a contest with my quilts.”

From a room filled with beautiful quilts, Griffith said one of the designs he works with is a leaf from a yellow poplar tree.

“I found the leaf, pulled it off the tree at Kingdom Come State Park,” said Griffith. “I brought it home and made a pattern from it. I’ve done several diff erent sizes and colors in that same leaf pattern.”

Other patterns Griffith quilts is the bob jack, bonnet girl and patchwork.

“I made a tumbling block quilt one time,” said Griffith. “It’s very hard. It liked to have drove me crazy. It took me months to get it together. I made it for someone else.”

Griffith said he makes all sizes of quilts and in all the years of making them, has only sold a few.

“It’s a past-time for me,” said Griffith. “It relaxes me even though you have to really concentrate or you’ll mess up pretty bad. It’s something people want and they seem to appreciate the quilt s when I make them and give them away. I enjoy giving. It makes me happy. It’s something I really like to do.”

Not only does Griffith quilt, but in the summer time he tends a garden, and preserves and freezes vegetables for himself and his family.

“When my mother was busy, she’d tell us kids to cook supper,” said Griffith. “There were times when I cooked for the entire family. It was just what we were taught to do.”

Griffith said for the Christmas season he bakes fruit cakes for his family and freezes them. He said he tries to do everything he can and sees no limits just because he is a man.

“I was at Walmart just the other day buying material for a quilt,” said Griffith. “A woman asked me what was I making. I told her a quilt. She just laughed and walked off . I don’t think she believed me. I tell people my quilts aren’t perfect but they’re better than a blanket of snow to lay under.”

Griffith has two daughters, Susan Howard, of Keith, and Gwen Morris, of Wilmington, N.C. He has five grandchildren and three great-grandchildren.