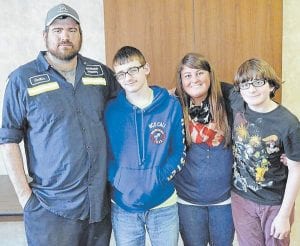 Rene Cornette posed for this photo with her husband and sons. (Photo courtesy Harlan Daily Enterprise)

Don’t bother Rene Cornette during a University of Kentucky basketball game. Don’t call her house, don’t knock on her door and don’t make any plans for family or other gatherings that you need her to be a part of when a game is scheduled.

“I understand I am a fan to the extreme,” she said.

Cornette’s love for basketball began at an early age as she grew up playing against her dad, Gary Cobb, at their home in “Around the World” near Wallins. “I am geared like my dad when it comes to basketball. I take it very seriously. I get it from him.”

She played middle school ball and cheered in high school. During it all, she watched the Wildcats’ games with her dad. “That is just what we did,” she recalled.

Her passion for UK sports continued to grow and has now earned her a bit of notoriety. She is now known as the mother from Harlan County who is behind coach John Calipari’s new slogan — “Succeed then proceed.”

Cornette said she happened to hear news of the slogan contest while listening to Matt Jones on Kentucky Sports Radio, something she does regularly. She had just returned from supporting UK in Indianapolis and was catching up on the family’s laundry. She knew immediately she wanted to be a part of the contest and submitted a slogan.

“I always felt the players came here (to UK) and they want to succeed and then go on with their lives,” she said. Putting words together for the slogan matched that interpretation, thus her entry was born.

“Everybody knew that was my slogan,” she said. Even then, she admits not fully comprehending the magnitude of what had happened.

“It didn’t really hit me until the team had on the T-shirts with the slogan,” she said.

While she didn’t expect to win, she saw a tweet by Jones that he actually liked the slogan. She later was contacted by the university seeking permission to use it. Another call followed the next day telling her Calipari “loved” the slogan and he would be calling her later on. She was restricted from sharing the news for several days until coach Cal tweeted the winning slogan to the Big Blue Nation.

“ It clicked with him,” she said. “That is the neatest thing. He heard it, he got it. That he really liked it is the best thing… To me, he (Calipari) embraces UK. He embraces our tradition. If you listen to him it is like he grew up a UK fan. He gets it.”

While her team only fell one victory short of the national title, she said, “They did so much and exceeded expectations… That was so great. The run they took was so great, Louisville, Michigan, Wichita State and Wisconsin.”

Cornette spends some of her time writing from the UK fan’s perspective for Vaught’s View.

“It is interesting a housewife from Harlan County has about 2,300 people following her on Twitter,” he said.