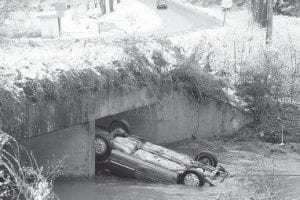 An overturned vehicle is pulled from the Laurel Fork stream in Bledsoe, Ky., on Dec. 12. Kentucky State Police Trooper Walt Meachum said the vehicle overturned and submerged in a stream just before 1 a.m. and was swept into a culvert by rushing water. The driver, Benjamin Blanton II, 34, of Wallins and a passenger, Kevin Jewell, 31, of Harlan, were unable to get out of the vehicle and were pronounced dead. Two other passengers escaped. (AP Photo/ Harlan Daily Enterprise, Debbie Caldwell)