Harrellson rises up from comic relief to cult figure 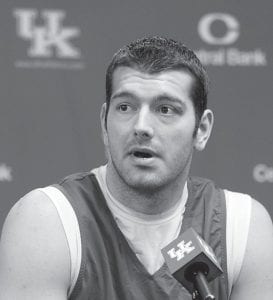 Kentucky’s Josh Harrellson answered a question during a news conference in Lexington on Tuesday. Harrellson’s teammates call him Jorts. Opposing coaches have called him everything from “mother hen” to the most underrated big man in the country. (AP Photo/Ed Reinke)

The thought was the Wildcats were done without the highly recruited Kanter. That they couldn’t thrive relying on Harrellson, a little-used reserve who played all of 88 minutes as junior, to serve as their only post presence.

Harrellson tried not to take it personally. He knows better than most how good Kanter is and even offered to give up his senior year if it meant Kanter — sidelined for accepting improper benefits while playing for a Turkish club team two years ago — could take his place.

Though it was a heartfelt gesture, it had no bearing on Kanter’s situation.

And the rest of one of college basketball’s most ardent fan bases. 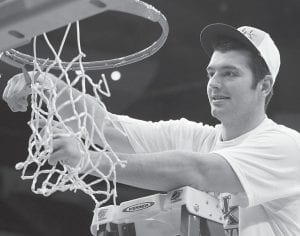 Kentucky’s Josh Harrellson finished cutting down the net after the Wildcats defeated North Carolina in Newark, N.J., on Sunday. UK advances to play UConn in the Final Four this Saturday at 8:49 p.m. on CBS. (AP)

Harrellson was considered too goofy, too slow, too inconsistent to be considered a legitimate threat at either end of the floor.

This is the same kid who once skipped a game as a freshman in high school to go deer hunting, who had his Twitter privileges revoked by Calipari after expressing frustration over what he considered a lack of respect from his coach.

Kanter’s nickname is “the UnderKanter,” a twist on one of his idols, professional wrestler “The Undertaker.” Harrellson’s nickname is “Jorts,” a tribute to his affinity for knee-length jean shorts that he likes to wear regardless of the sometimes unpredictable Bluegrass weather.

Many felt there was no way the Wildcats could be considered a legitimate Final Four threat with Harrellson as the enforcer. But the end of Kanter’s season became the beginning of Harrellson’s renaissance.

The player considered an afterthought in October is owning March while leading the Wildcats to their first Final Four in 13 years. Kentucky (29-8) plays Connecticut (30-9) in Houston on Saturday for a spot in the national title game.

“ When Josh heard Enes couldn’t play, he changed his mentality,” said Kentucky guard DeAndre Liggins. “He started to do all his extra stuff to make him better.”

Technically, Harrellson didn’t have a choice. Calipari’s punishment for Harrellson running off at the Twitter was to make him run until he puked on the court. He ordered Harrellson to endure grueling conditioning drills 30 minutes before each practice.

Calipari was trying to get Harrellson to quit. Harrellson did the opposite.

Suddenly the kid who admits he only picked up the game because he was tall and good at it, but couldn’t play more than a handful of minutes without asking to come out, was running the floor alongside Calipari’s latest batch of McDonald’s All-Americans.

He scored 23 points and grabbed 14 rebounds in a win over Louisville on New Year’s Eve and led the Southeastern Conference in rebounding, averaging 8.8 in league play.

Harrellson has been even better in the postseason, where he’s averaging 12.8 points and 8.7 rebounds a game while holding his own against some of the best post players in the country.

Battling against Kanter — who opted to serve as a student assistant following his NCAA ban — in practice each day gave Harrellson confidence he could hang with the best. Kanter held the advantage early in the season, but their oneon one battles aren’t so lopsided anymore.

That confidence has allowed Harrellson to play with a fearlessness he lacked during his first two years on campus after transferring from Southwest Illinois College.

Harrellson simply refuses to back down from a challenge no matter who he’s banging against.

The former Little League pitcher threw a fastball off Ohio State freshman Jared Sullinger in the regional semifinals while falling out of bounds. The play helped ignite the Wildcats to a 62-60 upset and led Buckeyes coach Thad Matta to call Harrellson one of the most underrated players in the country.

He was just as good in the regional final against North Carolina. Harrellson finished with 12 points, eight rebounds, four assists and two steals as the Wildcats moved on to the Final Four for the first time since winning it all in 1998.

The Final Four is rarified air for a player who spent the first three days of his high school career in St. Charles, Mo., standing alone under a basket until he proved to coach Ben Owens he could make one.

“He didn’t know what to do,” Owens said. “He was extremely confused. He couldn’t really dribble. He just didn’t have any basketball sense in him, which is completely understandable.”

He didn’t have much common sense, either. Though he’d worked his way into the starting lineup for Owens, the coach remembers one Saturday when he hopped on the bus for a road game and Harrellson was nowhere to be found.

It took Harrellson a few weeks to get back in Owens’ good graces. He’s been there ever since. The coach expects to be in Houston on Saturday when Kentucky continues its quest for an eighth national title.

Harrellson isn’t quite as tight with Calipari, but they have won each other’s respect. His play has served as an inspiration to his teammates and proof to Calipari that no player is a lost cause.

“He’s been probably one of the things that’s keeping us in it toward the end,” said Kentucky point guard Brandon Knight. “He shows that if you work hard … each and every day you can come and get better.”

Harrellson has been good enough to make people stop asking about Enes Kanter.