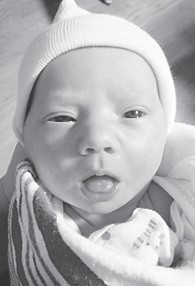 Abigail Nova Phillips was born on June 27. Her parents are Samantha Mullins and Gage Phillips. She is the granddaughter of Sammy Mullins of McRoberts, Elaine Mullins of Cromona, and Tonya Gunter of Virgie.

How is everything in your little corner of this big old world? I should say my how time flies when you are having fun!

Time is going so fast that I am getting dizzy. Actually that part about getting dizzy is true as my blood pressure decided to take a plunge instead of high! So very low that I’ve come very close of passing out and not knowing why! Things are back in control now!

I guess if I would slow down a little it might help.

Saturday, the City of Harrison was invaded by Morgan’s Raiders in commemoration of the 150th anniversary of Morgan’s Trail through Ohio. Morgan’s Raiders paraded where they originally started through Harrison. Leading the pack was that old scallywag himself, General John Hunt Morgan.

Early Saturday morning I decided to call Polly Maucher since it had been sometime since I had heard anything from Polly or Frick and Frack. Polly reminded me there was music in the park, and when I got on the computer I was reminded about the re-enactment of Morgan Raiders.

Watching this was really very interesting. I later talked to a couple of the men who had taken part in this event. At the beginning, a woman ran through the town to warn people saying she had to get home to get her pies. At the end as I was passing, the same woman was giving a man heck for getting her pie. She threw flour on his back while he was walking away with her pie, then picked up a rolling pin!

A bystander asked her where the men were, why they didn’t protect her? The woman replied the men were off fighting a battle.

I laughed and said with that rolling pin she didn’t need anyone to protect her.

The women were dressed in the attire of long dresses that were worn during the Civil War era, and I dearly loved that part of the re-enactment. I talked to a few of the women who made their bonnets and dresses along with the undergarments. I was surprised to find out the pantalets that were worn had openings to accommodate the women who wore them.

I know first hand of pettipants as I used to square dance, and of course I have heard of pantaloons, but not pantalets.

The corsets reminded me of a back brace I had to wear several years ago as it was laced so tight, and the bonnets were made on the old-fashioned style.

Yes, I had a conversation about the clothes. After all, inquiring minds want to know.

The men’s coats were wool, and you could tell they were really hot and uncomfortable though everyone played their part so well.

The horses were beautiful and though there were guns fired they weren’t skittish at all.

Only one thing that would have made this reenactment better, to have seen Gary Eldridge participate as he is involved in Civil War reenactments.

I went to Hamilton to see a program called, ‘What’s Your Story?’ This episode featured Warren and Judy Waldron who are icons in the music world in this area and lots of other places. Warren and Judy participate in old-time music and play in several bands plus doing events as Warren and Judy are husband and wife. There are Pine Ridge Partners, Rabbit Hash String Band, and Jericho Old Time Band, just to name a few.

Saturday evening Hunter’s Pizzeria featured the Haddix Family. After a busy day I met up with Les and Pat Wagner, and Larry and Becky Hasty, along with their daughter Polly. Needless to say it was a very enjoyable evening.

Les and Pat have been busy canning green beans, and so have Larry and Becky. I sent Les a note saying I wanted cabbage and green beans. I was a little too late as everything had been picked and put away for winter.

I was only kidding.

Sunday morning Vicki Power and I took the van and set out for a drive that ended up at Madison, Ind. I found the location of the river by accident. We stopped for a while, then I drove up a random street, I think it was Craigmont. Whatever it was, the scenery was beautiful.

Vicki and I stopped at Rally’s for a bite to eat. While sitting under the umbrella at Rally’s we laughed so hard we could hardly chew our food. How silly can you be to drive over 80 miles one way, then eat at Rally’s?

I had plans to go to Fairborn, for OKI as I belong to the club. My mind changes as quickly as the weather, as several know.

Summer is going to be gone before you turn around and I can stay inside later. For now I am going to enjoy outside as much as possible.

I talked to Ann Calihan and I am glad to say she is improving. Their daughter Sue Wagner has spent a couple of weeks with them. Of course the other kids are always there to check on their parents.

Gwen Huff Farmer is starting to have a little health problem and is supposed to be taking it easy, and yet she is out in the garden.

One day this week I am going to take a fast trip by Doyle and Betty Ison’s to get a look from their deck.

Once again I am thinking of putting my house on the market for sale, but then as I walk out on my porch I wonder if I would be satisfied anyplace else in this whole wide world as I am right here!

The Hamilton County Park owns the land surrounding me, and it is a field of wildflowers and weeds. if I ever go in my yard and I find a snake from the field, well the house along with the contents plus my car and van may be sold by the children as I may die of a heart attack, or leave and never return.

Emma Engle, it is so good to pick up The Mountain Eagle to read your column. Oma Hatton, I am sorry we didn’t connect.

As much as I enjoy going back to the mountains it will never be the same again. Even though there were so many years that passed that my brother Richie Hall and I didn’t see each other, I knew he was all right. Now with Wallace Lee Richie, and my sister Loretta gone, plus our parents, I know the emptiness and the true meaning that it is not home any more.

It is good to be with my brother Jerry Hall and Mattie Hall, but Jerry’s health isn’t good and I don’t want to be a burden on anyone.

The news of the little boy of the near tragedy at Indiana Dunes of Michigan City, Ind., is so wonderful that though he was buried alive, he will be all right.

Several years ago two friends and I walked up those sand dunes, so it sure gave me a creepy feeling thinking of how many others have done the same.

I may sound weird because I feel the same way in my own yard as I have a septic tank, and as an elderly man I know was mowing his yard several years ago, the ground gave away and he could have died as he spent several hours like that before he was discovered.

It seems with all the rain we’ve had that the pavement has given away to holes that has devoured cars.